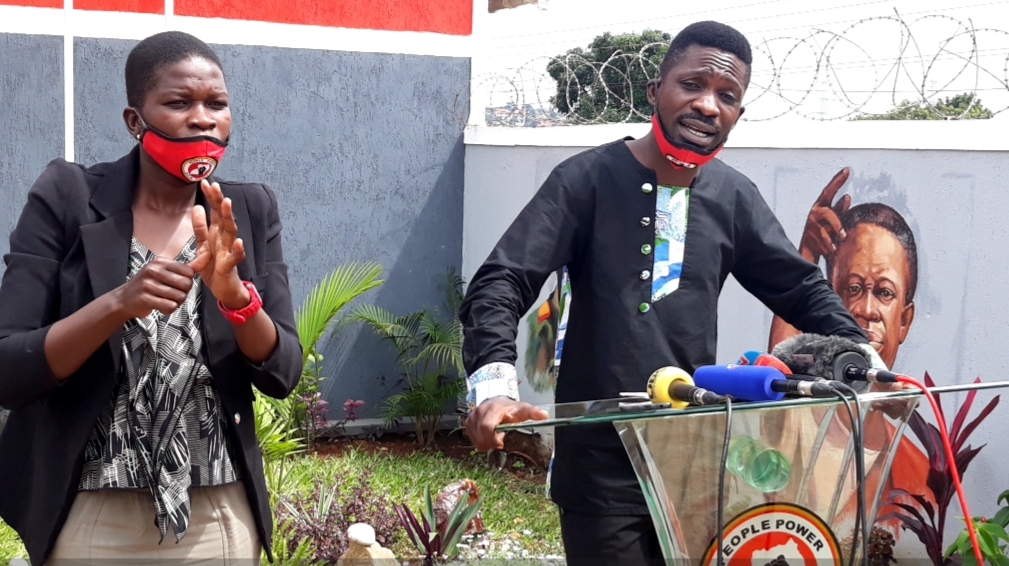 While addressing media at the People Power secretariat in Kamwokya, the leader of the People Power Movement Hon Kyagulanyi Ssentamu Robert aka Bobi Wine has pointed out a number of concerns about the way the NRM government has failed completely to deliver in relation to the livelihood of the people of Uganda.

The first concern pointed out is the extension of the lockdown without justifiable reasons. President Museveni extended the lockdown on account that people lack standard masks where he said that the government will ease the lockdown on condition that government serves all the people with masks in the next 14 days.

The People Power leadership has also showed concern about the move by government to ban the customized People Power Masks and other provisional masks already made by Ugandans as there is no scientific evidence to stop people from putting on any type of mask provided it stops the spread of coronavirus.

Slow pace food distribution by the government has worried the People Power leadership as many Ugandans are starving and dying of hunger yet 59 billion shillings was passed in the last two months to cater for the whole process.

The People Power leadership has showed dissatisfaction on the way the government has kept a deaf ear when it comes to Ugandans who are still stuck abroad yet 3 people were recently cleared by Minister Sam Kuteesa to return home despite the efforts put across by the People Power leadership to support all Ugandans who are stuck abroad more especially those from China. It ought to be remembered that government declined the offer by Bobi Wine when he partnered with Atalanta Black stars to allow citizens land at Entebbe airport without Uganda spending any coin on them. The group was willing to meet all the quarantine costs.

They have also tasked government to give starving Ugandans part of their NSSF money to help them through this hard situation and not pretend as though it doesn’t know what to do.

On another note, the People Power leadership has warned government over plans to regulate and get rid of taxis and boda bodas in the central business districts since they represent majority of the common man. “For the city to develop, it should develop together with common people as stakeholders.” Bobi Wine emphasized.

READ ALSO:Government plots to get rid of bodas and taxis in Kampala

They have also shown concern and warned government over financial mismanagement in public entities at the cost of tax payer like dishing out money to minors.

When addressing about the NRM celebration of fulfilling 80% of its manifesto, the People Power leadership has rubbished everything and pinned NRM government for failing completely. “Talk of the National Ambulance program, standard gauge railway, healthcare system etc. No achievement to brag about.” Bobi Wine emphasized.