Aftere a span of approaches to pull comments from Bobi Wine, Maj. Gen. Muhoozi Kainerugaba has today angrily warned People Power supporters to back off the red berets which he says are his own invention and monopoly.

SEE ALSO : First son Muhoozi and his supporters plead to meet Bobi wine for a sit down

The first son’s warning comes months after failing to attract Bobi Wine’s attention despite his several attempts to be recognized by the People Power leader.

Muhoozi is fully aware that the only stumbling block to his direct hereditary ascension to presidency is Bobi Wine. He knows he can’t be president at a time when another popular generational face has emerged.

RELATED: Muhoozi angry at Bobi Wine for not tweeting about his birthday

All Muhoozi’s attempts to silence Bobi Wine have failed. The attempted assassination in 2018 during the Arua byelection he commanded did not take Bobi’s life as he had planned. In addition to the buying off Bobi’s close confidants like Buchaman, Full Figure and the latest fish being, Ashburg Katto who has been the movement’s lead blogger. 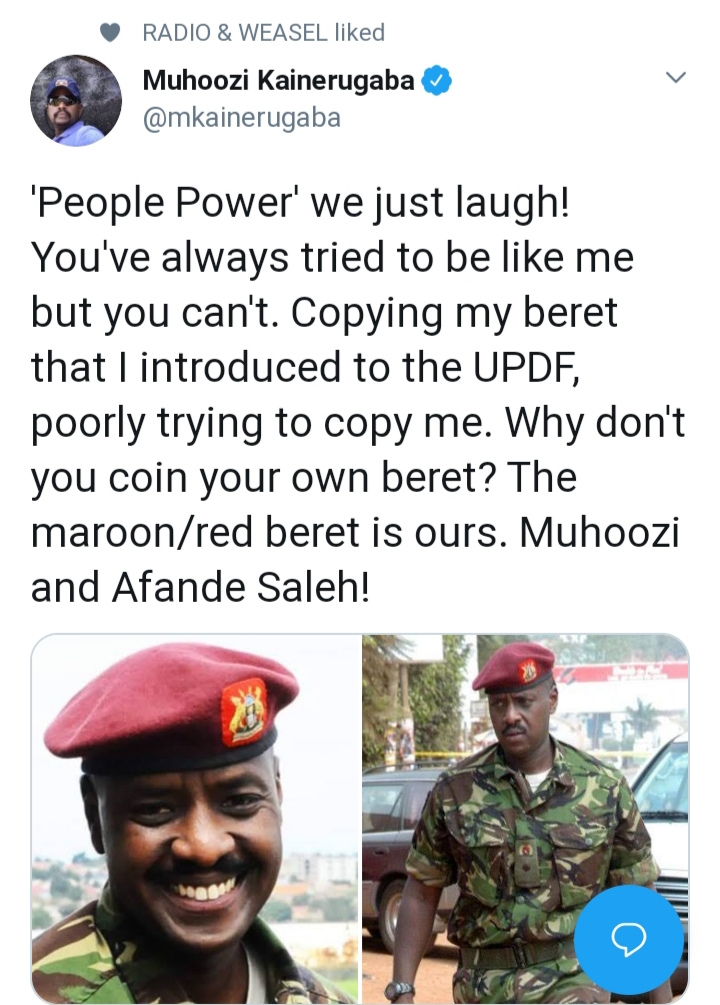 Muhoozi is very puzzled about Bobi’s silence. Despite all these moves he has so far made to win attention from the musician-cum-politician, there has never been a formal response. Even on his recent 46th birthday when he was highly expectant of a tribute tweet from Bobi Wine, the tweep general did not see anything.

Tired of the long wait for Bobi Wine to at least make mention of him in his address, Muhoozi influenced his Father’s ban on the People Power face masks. Barely a day after he so did, he has now made a provocative tweet to pull the attention of Bobi Wine and his fans. Published on Tuesday 19, May the first son says;
“People Power, we just laugh!
You’ve always tried to be like me but you can’t. Copying my beret that I introduced to the UPDF, poorly trying to copy me. Why don’t you coin your own beret? The maroon/red beret is ours. Muhoozi and Afande Saleh!”

The tweet has since pulled a span of criticisms from Ugandans. Many accused him of tweeting under alcohol influence since he’s renowned as a booze general who never leaves Kololo bars.