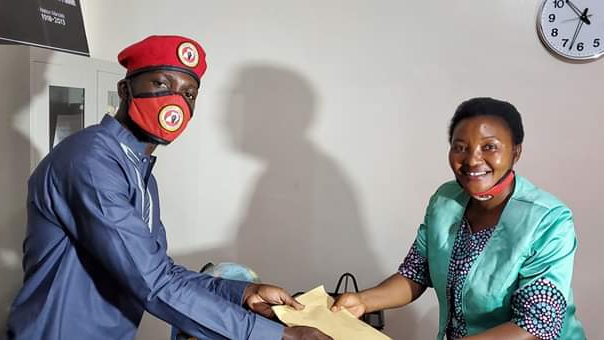 The Kyadondo East Member of Parliament who doubles as the leader of People Power -Uganda has handed over a contribution of 13.5m shillings from friends both home and abroad to Kasese Flood victims to Hon. Winnie Kiiza.

Heavy rains in the area of western Uganda swept away homes, schools, submerged farms, cut off bridges and left several roads inaccessible, affecting 24,760 houses and an estimated 173,000 people, according to a disaster committee interim assessment report.

The floodwater destroyed the Nyamwamba hydroelectric power station, and overran the wards, mortuary and drug stores of Kilembe Mines hospital.

The villages of Kyanjuki, Bulembia and Katiri are now buried under mud and huge stones that were propelled down the mountain. Homes on lower land are submerged in water

Winnie Kiiza a woman Member of Parliament representing the people of Kasese in partnership with Rwenzori Social Justice, launched a fund-raising drive, under the theme, “Contribute & Restore Hope” which has seen the People Power group join the cause.

It ought to be remembered that Bobi Wine visited Kirembe Hospital, Kirembe Secondary school, Namunga and Bulembya to give out 1000kgs of sugar, 1000kgs of maize flour and 1000kgs of beans and some clothes to the people affected with floods in 2013