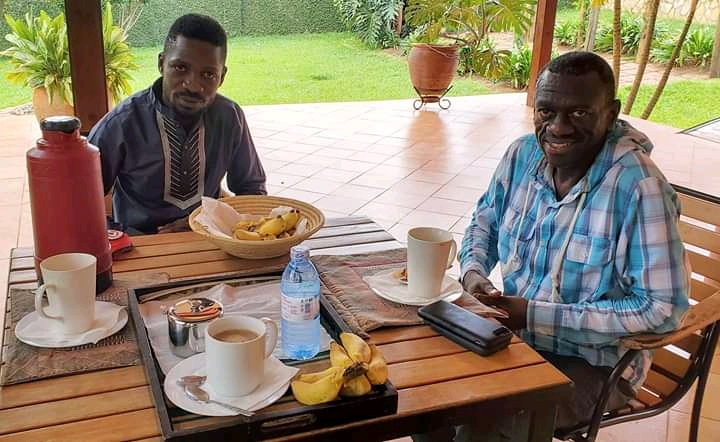 The development which was the talk of the mainstream and social media has been warmly received by the disciples of both the People Power and People’s Government as they anticipate victory in case their frontliners could embrace unity. Ekyooto has learnt that Bobi Wine and Dr. Besigye have held a series of talks over who should bell the cat in the forthcoming polls. We are told the two leaders are about to reach an agreement although we could not ascertain from the spokespersons of the two political fronts.

The push for unity has for long stalled at the two sides because of emergence of heresies and fabricated narratives that some members of either sides collude with the ruling NRM party. Social media bloggers like Tom Voltaire Okwalinga, a pseudo-account run and managed by FDC iron lady Ingrid Turinawe would spread hate propaganda against Bobi Wine, something that his supporters could not entertain. Museveni’s strategists had advised him to finance this division in the opposition if he is to prolong his stay in power. As a result, several FDC bloggers were deployed to launch online propaganda against Bobi Wine and ensure that he would be demeaned to a point where Besigye would lose interest in meeting him. Ingrid and Harold Kaija are said to have reaped from the deal that was concluded at a minimally attended sensitive meeting at State house Nakasero in January 2019.

Today’s Bobi-Besigye meeting has not left the NRM strategists sitting. They reportedly held an emergency meeting flanked by Kasule Lumumba, Balaam Barugahare, and Museveni’s son in law ,Karugire. They met at Kati Kati restaurant in Kampala. Tied to official duties, Museveni could not attend in person but delegated Karugire to represent him and collect the minutes of the meeting. The new recruit Ashburg was also present as he arrived an hour later to collect some work gadgets from Balaam. At exactly 2:00pm, the discussions kicked off with the NRM bigwigs grilling Ashburg for failing to disunite the opposition forces like he had pledged. “You told us Bobi Wine and Besigye are sworn rivals. What was the essence of their meeting today?,” Karugire asked Ashburg who shyly could not answer. This appears to insinuate that Ashburg has been an undercover spy on a long term mission. We are hinted that his role, just like Ingrid’s is to ensure that Bobi Wine and Besigye remain at parallels. NRM officials claim that their long term investment in the division of the two opposition strongmen could not he yielding yet the 2021 polls are drawing close.