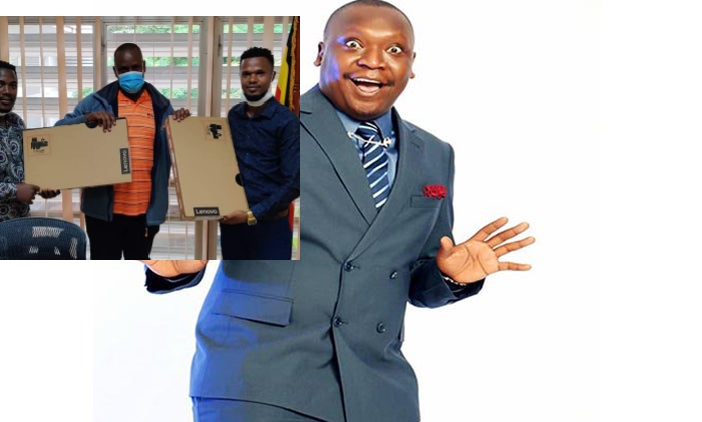 Comedian Idringi Salvador has urged blogger, Ashburg not to create parallels with his former colleagues if he wants to enjoy the ‘fruits’ of his defection.

Speaking in a video that is already making rounds on social media platform, Salvador lashed out at the blogger and asked him to behave and keep his execuses to himself as he owes nobody any explanation. The comedian says Ashburg’s stay in the NRM may not be permanent according to his analysis of how other recruits have been used and dumped. “He is not the first to be signed in. People have joined and left by themselves. Threatening to spill the dirty linen of your colleagues is not the way to go. Your stay in the NRM is probable,” warned Salvador. “It is always good to take a peaceful leave other than provoke your comrades in People Power,” he adds.

READ ALSO: EXCLUSIVE: The Rise and Fall of Ashburg Katto

The comedian further warned of the likely danger Ashburg may face in case he does not tame his ‘big mouth’. “I know he is acting under extreme excitement but he has to cut the pace. You don’t know what the future brings along. The Baganda say ‘gyova toyombye wewaba ewaka’ (where you quietly leave is always home).”, says Salvador. “He says he has been a Museveni critique for 15 years. Come on, People Power is not even three years old yet,” concludes Salvador with a mockery laugh.

The defection of Ashburg to the ruling NRM was never a surprise according to reports from colleagues privy to the blogger. Many who spoke to us, say they knew his impatience and love for luxuries would not maintain him in a movement that struggle. Reacting to the defection, Bobi Wine’s music Producer Dan Orweyot alias Dan Magic said, ”When I saw him dreaming of driving a vitz, I knew he would not stick to the struggle for long”.

Salvador Idringi alias ‘man from Ombokolo’ featured in the ‘Tuliyambala Engule’ Bobi Wine revolutionary hit song, a thing that earlier earned him the trust of People Power disciples till he broke their hearts when he met president Museveni five months back at State house, Nakasero. Away from that, Salvador was the first celebrity to openly condemn the brutal arrest of Bobi Wine in 2018.