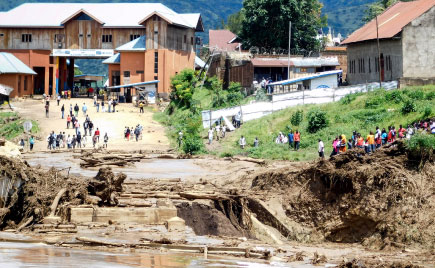 On Thursday, May 20, president Museveni boarded a UPDF helicopter to tour the Kasese community that had suffered from the calamitous floods which ravaged villages neighbouring River Nyamwamba, Mubuku, Nyamugashana and Lhubiruha.

Reports say, Museveni’s impromptu visit was widely inspired by the meeting between the Kyadondo East legislator, Robert Kyagulanyi Ssentamu and the Kasese woman MP, Winnie Kiiza which happened that very day with the former donating relief items and cash worth shs 13.5 million. We’ve also learnt that the Speaker of parliament, Rebecca Kadaga was also supposed to visit the Kasese community in this very week but Museveni had to prematurely dominate the scenes in his usual script of being all over the place.

Remember, the flooding had happened several weeks back but Museveni did not even bother to show any solidarity with the victims. But his silence is genuine and understandable. Perhaps he knows how unpopular the NRM party ideology is, in that district since it is the only area with all constituencies represented by opposition members in the tenth parliament. Museveni had delegated his disaster preparedness Minister, Musa Ecweru to make assessments of the damages, take pictures for formality and return to Kampala and that was all for Kasese victims. His hate for the Kasese community still stands. If we torch back into the preceding events that happened in the aftermath of the 2016 election, we recall how Museveni ordered the UPDF invasion and bombardment of the Obusinga bwa Rwenzururu palace as a signal of scaring off any sort of resentment from the indigenous community. The ugly events saw a great deal of people massacred and according to independent reports by the Human Dights Watch, the number of deaths soars beyond what the NRM government had reported. The Human Rights Watch established that dozens of women and children were killed in the raid as evidence of children’s toys was found by their private investigators. The heinous events ended with the exiling of the reigning King, Charles Wesley Mumbere who to-date remains under house arrest in the capital, Kampala.

READ ALSO: An insight into the Kasese palace raid

Therefore, Museveni’s post-flooding visit to Kasese was just for formality. He was never in the first place interested given the killings that still freshly etch on his memory but the pressure exerted by Bobi Wine was enough to force him change his mind. In fact, that Thursday, he boarded the UPDF chopper as soon as the news of Bobi’s charity efforts had hit the news airwaves. Museveni knows it would be shameful for Bobi Wine spearheading the humanitarian efforts when he himself (sitting president) has not yet made a move.

The Kasese Local Council Chairperson, Sibendire Bigogo Thembo says he was never notified of Museveni’s visit. He arrived without informing any member of the local district leadership. Reports say, Museveni failed to hide his hate on the community after he even overtly rejected the hoisting of the Obusinga cultural flag. “One of our people was ordered to take back the Obusinga flag. He was told it was not required,” says the Kasese LCV boss. “We were told that Museveni did not want to see anything like the Rwenzururu flag near the function,” he adds.

Immediately after touring the Kilembe hospital which had been swept away by floods, Museveni flew back to State house Entebbe without even assisting the flood victims. Residents of Kasese who spoke to this site say, they don’t mind what Museveni says or does in their area. “We just look at him as a ghost. He is the reason for all these floods and disasters in our area,” says Josephat Muhindo who thinks the River banks burst because of the Omusinga’s overstretched absence from the area.