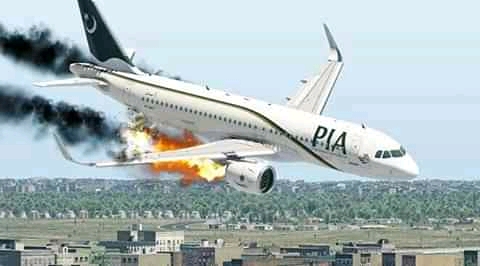 A passenger plane with at least 98 people on board crashed in a populated area minutes before its scheduled landing Friday afternoon in Pakistan’s largest city of Karachi, destroying multiple buildings on both sides of a narrow street.

Rescue efforts were made difficult by huge plumes of dust, smoke and heat from the crash on an already hot afternoon, along with narrow neighborhood streets. “I heard a big bang and woke up to people calling for the fire brigade,” said Karachi resident Mudassar Ali.

PIA spokesman Abdullah Hafeez said there were 91 passengers and seven crew on board the flight, which lost contact with air traffic control just after 2.30pm. “It is too early to comment on the cause of the crash,” he said.

Abdul Sattar Khokhar, of the country’s aviation authority, said the Airbus A320 was travelling from Lahore to Karachi. Pakistan Prime Minister Imran Khan said he was “shocked and saddened” by the crash, tweeting that he was in touch with the state airline’s chief executive. “Prayers & condolences go to families of the deceased,” said Khan.

The Pakistan military said security forces had been deployed to the area and helicopters were being used to survey the damage and help ongoing rescue operations, while offering condolences over the loss of precious lives in the incident.