EXCLUSIVE: Why the Indian community gifted M7 with warfare military facility ahead of 2021 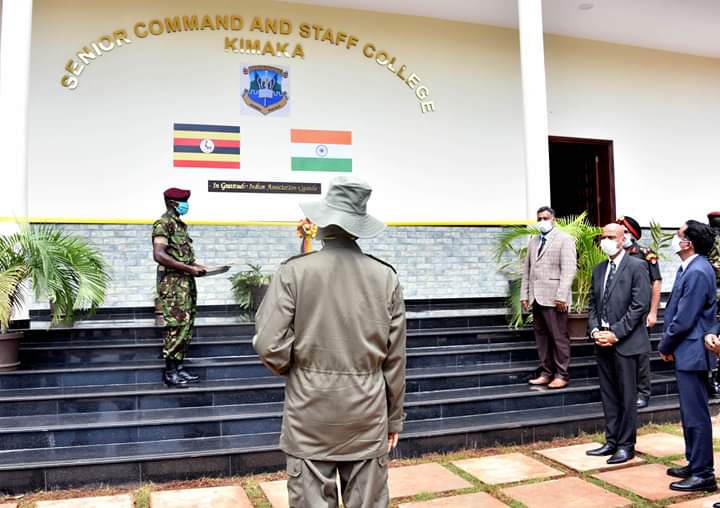 On May 23, the Ugandan head of state, Yoweri Kaguta Museveni was invited by the Indian community to Kimaka Senior command and staff college in Jinja district where he opened a mega army warfare facility in Jinja town.

Whereas it was guised as a fully patriotic donation to strengthen the bilateral ties of the two countries; Uganda and India, the reality on the other hand shows that Museveni is preparing for a struggle ahead in case the 2021 polls don’t go as he anticipates.

The Indian Association Uganda (IAU) in liaison with the Indian military advisory training unit gifted the facility to Museveni as their pledge to the consolidation of his extended rule. Most of the foreign communities in Uganda feel insecure in case Museveni government is toppled and therefore they’d rather finance its sustainability in form of liquid cash or availing campaign logistics to the NRM candidate. On record, it is only under the Museveni era that the Indians have successfully enriched themselves and looted resources unlike in the past regimes when their activities would be checked by the state.

SEE ALSO: Kadaga asks Jinja Mayor why he has denied land to Indians

Reminiscent of the Idi Amin era which expelled them out of Uganda, the Indian community feels obliged to sustain Museveni who has protected all their multibillion businesses. On record, it is only in the Museveni era that the Indians have belittled native Ugandans. Many even feel entitled for constitutional recognition as an indigenous Ugandan tribe and in fact, in 2016 they advanced interests to achieve that goal.

The $2,6500 ( 1 billion shillings) project was fully funded by the Indian military team ahead of the 2021 general elections which are a few months away. The Indian community wants to support Museveni’s aggressive and heavy handed suppression of his rivals especially Bobi Wine and the People Power activists who have counter checked the NRM for the past 3 years. Just like he has always swore to suppress the opposition before 2021, such military logistics can ably help him quash all the dissidents. In fact, our site has learnt that the shs 1b Kimaka military games facility has the entire map of Uganda where all jungles that may host rebels in case of an armed struggle are well marked.