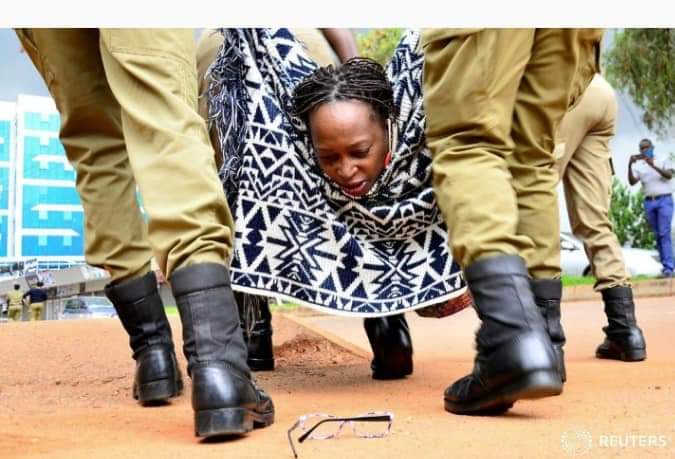 Renowned tireless human rights campaigner, Dr. Stella Nyanzi says she is petitioning parliament to intervene in the dehumanizing welfare of the armed security forces in Uganda.

Dr. Stella, a frequent police brutality victim has just left hospital lately where she’s been nursing injuries afflicted on her by men in uniform last week when she advanced with a Food Petition to the office of the Prime Minister.

As a researcher and learnt fellow, Nyanzi believes all Uganda’s armed forces are undergoing psychological oppression by their seniors which explains why they conduct themselves aggressively whenever they are deploy to contain peaceful protests.

In the petition shared with this site today, May 26, Nyanzi and other activists; Mukasa Andrew, Matovu Aloysious and Abbey Musinguzi write to the office of the speaker of parliament seeking audience to discuss the welfare of armed forces.

“..From our research which we will present to you and experience, we strongly believe the brutality of security officers stems from salaries, allowances and welfare among others,” reads part of the petition.

SEE ALSO: Could Police’s ill Welfare be the Source of their Hate on Ugandans

A low ranking Ugandan cadet police officer earns a net pay between shs 200,000-350,000 and sleeps in a shared temporary tent facility. Those ranking from corporal to sergeant earn between shs 350,000-450,000 while their seniors earn more than that. Reports about Uganda’s leading corrupt institutions rank the police at the top. Also independent reports by human rights advocacy groups show that police leads in brutalising the citizens.

A recent study showed that majority of police officers operate under stress. In fact, government even recruited Makerere University psychologists to address that matter amongst the men in uniform. See full petition below.