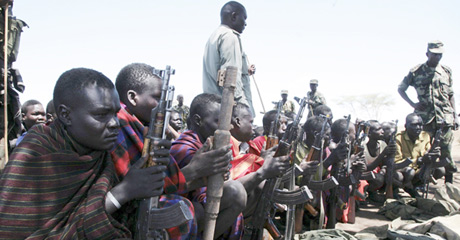 The Uganda Peoples Defence Forces (UPDF) will soon launch a disarmament exercise in Karamoja sub-region. The exercise is aimed at getting rid of illegal firearms from armed suspected warriors.

Meeting leaders from the districts of Kitgum and Lamwo on Monday in Kitgum, the UPDF 5th Division Commander Brigadier General Michael Kabango said that despite a successful disarmament exercise spearheaded by government decades ago, suspected Karimajong warriors have rearmed and reportedly making incursions in the neighbouring districts in Lamwo and Kitgum districts.

According to Kabango, should the suspected Karimajong warriors ignore the call to voluntarily surrender their guns, the army will have no option but embark on a forceful disarmament operation to recover all illicit guns form the warriors and also arresting those in possession.

RELATED: I have no interest in Karamoja – President Museveni

The Orom Sub County Chairperson Quirion Olum supports the disarmament plan by the UPDF but also wants security personnel deployed in the security zones along the borders with Karamoja and South Sudan, to protect the local communities from invasions by the armed rustlers.

Quirino says the repeated incursion by the suspected armed Karimajong warriors in Kitgum district has caused untold suffering to members of the community.  He says that the locals have abandoned rearing livestock and they cannot engage in any other livelihood activity.