NRM MP sells ambulance to himself, asks district taskforce to return it after covid 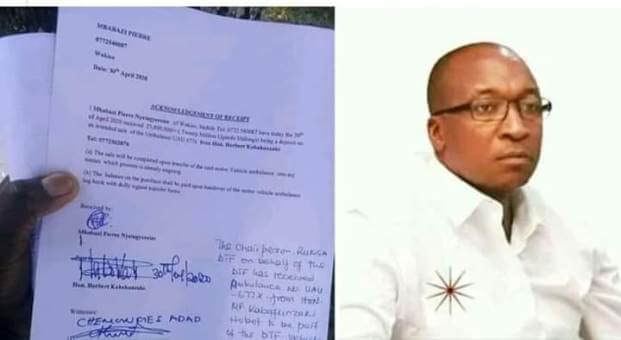 Former state Minister for labour, Herbert Kabafunzaki is under fire from Rukiga district council over making controversial statements regarding the shs 20m he obtained from parliament.

According to local media reports, the ex Minister has been appearing on radio talk shows claiming to have added an extra shs 5m to the covid package to purchase an ambulance for the district.

The controversy surrounding the ambulance is that the district leadership says Kabafunzaki retained the keys till they heed to his directive of returning it as soon as the covid crisis comes to an end. “We didn’t receive the ambulance keys. Kabafunzaki is still with the keys and has urged us to accept the terms under which he is giving out the ambulance,” says RDC Pulkeria Muhindo.

Angered by Kabafunzaki’s arrogance and shameless terms, the Rukiga district leadership has now unanimously resolved that he gives them shs 20m in cash. “Let him give us cash and take his old ambulance,” says Michael Mbareba, the district youth LCV councillor. “The ambulance is even in dire conditions, I doubt if it’s even worth shs 10m,” he adds.

Kabafunzaki first hit the public spotlight after he was red handedly nabbed in a bribery scandal in April 2017 when the Aya group tycoons bribed him with a whooping sum of money to suffocate a rape case involving a female Ugandan worker. Consequently Kabafunzaki was interdicted and his aides too were detained at Luzira prison. Just a few years later, Kabafunzaki was exonerated and retained his position as MP of Rukiga district.