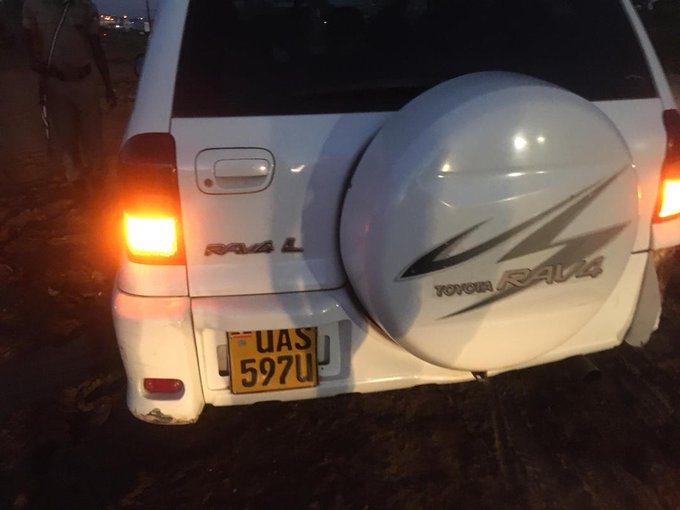 The run away RAV 4 model vehicle registration no. UAS 597U which knocked and killed a traffic police officer, Ayesiga Innocent belongs to a High court judge according to preliminary police findings.

In a Thursday statement, police says they have reviewed the street CCTV footage which captured that fateful day’s accident and it shows the RAV 4 vehicle knocking their traffic officer as he rides a police motorcycle infront of them. The same footage reportedly shows the knocked officer staggering infront of an advancing Ford Ranger registration no. UBG 896E which also knocks him and he loses consciousness.

The Kampala Metropolitan police spokesperson, Luke Owoyesigire today told journalists that the occupants of the RAV 4 vehicle are Aminsi Zimbe and Oduku Alex, a police constable guarding the magistrate.

Innocent Ayesiga died on Tuesday morning at Rubaga hospital where he had been admitted after being knocked and abandoned in the Namanve area along Kampala-Jinja highway. He was later found unconscious and rushed to Mulago hospital for treatment but due to his condition, he was referred to Rubaga hospital where he died this week. The driver and co-driver later returned from their hideout and handed themselves to police. According to a statement by the Deputy police spokesperson, Patrick Onyango the duo will be charged with reckless driving that caused death of an officer and also another charge will be ‘failing to report’ themselves to police.