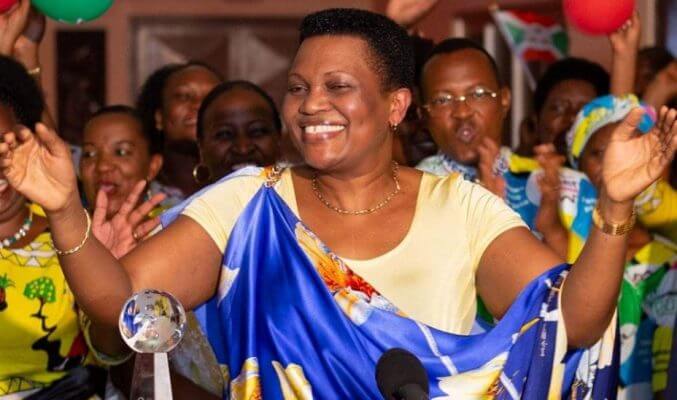 Emerging reports indicate that Burundi’s First Lady, Denise Bucumi Nkurunziza has been air lifted to Nairobi and currently she is admitted at The Aga Khan University Hospital after she reportedly contracted the novel Coronavirus.

Local media outlets in Bujumbura indicate that Mrs. Nkurunziza, was airlifted to Nairobi on Thursday morning, of May 29 on an AMREF chartered plane.

The same reports indicate that one of her three bodyguards has also tested positive for the novel Corona virus disease.

It is not clear how she was allowed entry into Kenya since the country has set strict conditions only allowing those who test negative entry.

Mr. Nkurunziza has received global backlash for doing little to stop the spread of the disease that has shutdown the whole world.
Burundi earlier this month ordered the country’s top World Health Organization (WHO) representative and three other experts coordinating the novel coronavirus response to leave the country.
Burundi, through its foreign ministry in a letter dated May 12 said the four officials “are declared persona non grata and as such, must leave the territory of Burundi” by Friday.
Burundi is the only African country that did not stop playing of football during the coronavirus pandemic.
The country also recently held their presidential elections which saw the governing party candidate, retired General Evariste Ndayishimiye, win with 69 percent of the vote.