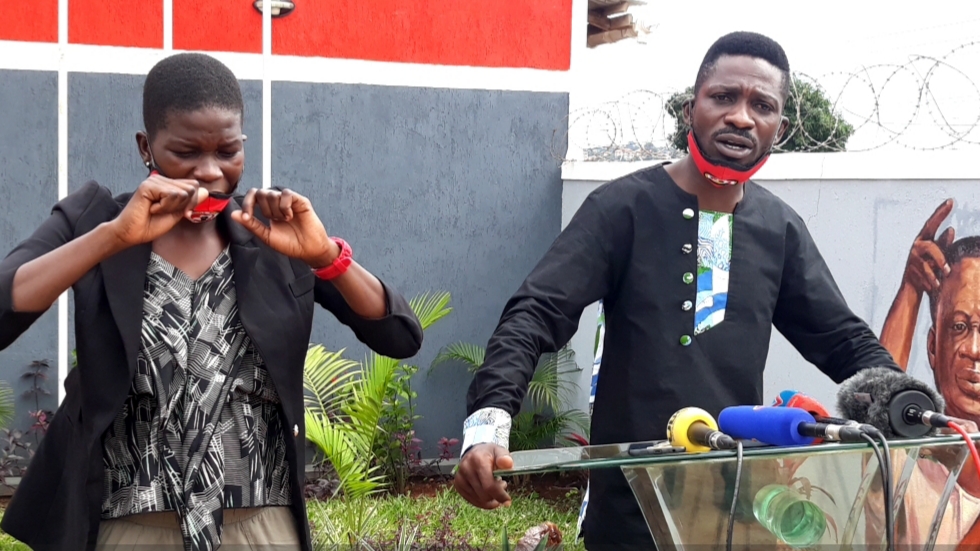 The Kyadondo East Member of Parliament and also the leader of the People Power Movement Kyagulanyi Ssentamu Robert alias Bobi Wine has today sent a very strong message to People Power comrades in the struggle pointing out a number of concerns to be dealt with in order to save the struggle and fulfill the mission and vision of People Power on the road to 2021.

“Brothers and sisters, I bring you greetings in the name of the Almighty God who gives us confidence and strength everyday to continue fighting for freedom in our country Uganda. Even in the face of many challenges, we soldier on, knowing that God is on our side.

I salute all of you for your resilience as we face this unprecedented coronavirus pandemic. In Uganda’s case, the effects of the pandemic have been worsened by the effects of bad governance. The majority of our people are hungry and simply desperate.

In the coming days together with fellow leaders, we shall come out to give direction to the nation on the way forward.

Today, I want to address the issue of persistent fights and public spats between the people who profess to be fighting for freedom and democracy. I have noted with great concern comrades who are always fighting and attacking each other on social media. Some comrades have gone ahead to use social media to attack everyone within the forces of change. They are always promoting divisions and suspicions amongst comrades in a very unprincipled manner.

Some have gone as far as saying that People Power is full of spies working for the Museveni regime. They have deliberately tried to demoralize and demobilize our comrades through targeted propaganda. We all know that this only benefits the regime and yes, it greatly affects our struggle.

My question to these comrades has been and continue to be, “who are you working for?” As I have said in the past, everyone whose actions speed up the fall of Museveni regime is a comrade no matter which political formation they belong to. And yes, everyone whose actions help the Museveni regime to stay longer must be seen with suspicion and their intentions must be questioned.

By now, I would expect all of us to understand that a dictatorship like that Museveni survives through promoting divisions amongst the forces of change. Why is this not obvious to those comrades? All dictators use the same trick. They usually plant people to bring confusion in the opposition.They might be pronounced pro-regime people, but they may also pretend to belong to the opposition. In our case for example, they will attack everyone around the leader except the leader. And the intention is that they want the leader to see everyone around him with suspicion and of course if the leader falls into this trap, it could be very dangerous for the struggle as a whole.

WE MUST JUDGE EVERYONE BY THEIR ACTIONS until someone declares himself or herself to be against the people of Uganda, it is not in our place to declare them spies. Why should we demoralize a comrade who wakes up every morning to mobilize against the dictatorship by calling him or her a spy?

Question, am I then saying that the regime will not plant people in our camp? Ofcourse not. All dictatorship survive because they use public resources to compromise people within the struggle. They also use violence, co-opt the elite, unleash propaganda and capture the institutions of the state just the way it is happening in Uganda. It is not a secret that Museveni has survived by buying off and compromising people within the forces of change over time.

As leaders, we have the mechanism to know, who amidst us might be working with the enemy and I request that the same way you have trusted us with leadership, you trust us to deal with these individuals. We all know that dictators are always in the market and those who make themselves available for sale will be bought. Some are bought expensively while others are bought cheaply. It is like slave trade where the negotiation is for human beings, except that in this case, the dictator not only buys the bodies but also buys the souls of those people.

President Museveni is not bothered about this because he never uses his personal money anyway. He does not sell his cows to buy off his opponents. No.. He uses tax payers’ money, our money. The money that you and I work hard for is what he uses to buy off a few of us hoping that he will silence the loud voices yearning for change. For example, the money which he charges Ugandans to use the internet everyday is more than enough to buy off so many opponents.

In FY 2018/2019, 49.5bn was raised from the OTT tax. Assuming he was to pay 100 million shillings per person, he would be able to buy off 495 people with this money. Of course there are some people, who think their freedom can be bought with much less and therefore the dictator always have enough funds to spend on patronage and bribing. In any case, one of the first things a despot like Museveni does, is to make the people very poor. He make sure that he’s the only one left with real money and therefore after eating to his satisfaction, he’s able to throw a few leftovers to the opponents who are available for sale. That is how dictators keep in power before they fall!!

The Museveni regime has excelled in evil and in the years to come, historians will study about it as a classic dictatorship which used propaganda to turn oppressed Ugandas against each other and ofcourse they will study about us who fought it and brought it down. After stealing trillions and giving a few millions to some opponents, Museveni uses those same opponents to claim that they quit the struggle because they were not given money!

In my case for example, the same regime which has blocked most of my sources of income uses people to suggest that I have a lot of money which I’m not giving out!

My fellow Ugandans, let me repeat this once again. The Museveni regime is buying people using your money. Those who refuse to be bought will be harrassed, intimidated and some will even be murdered. So please, don’t be scared when you see all this. What we’re involved in is a real war. We are struggling to get our country out of the hands of the clique of people who forcefully and illegally took over our country in 1986 and they now believe it is their personal property. They have turned all of us into slaves and we must fight to free ourselves.

We’re fighting to dismantle an empire. Ther will be causalities, there will be defections. There will be people giving up, there will be sellouts, there will be betrayals. You will be with someone in the morning, and by evening the person will be speaking a different language. All should be expected. But like the scripture tell us, those who persevere until the end will be saved.

One falls off, the rest of us must move forward. Freedom is coming soon and it will be our prize. Therefore comrades, keep your eyes on the prize no matter how dangerous and scary these dictatorship have been, they have always fallen in the end. We shall overcome.”

What is then left is to see whether People Power comrades will respond positively and follow the laid guidelines in accordance with the principal’s request.