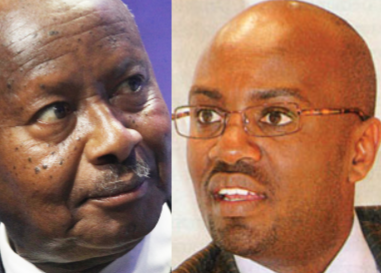 Veteran journalist Andrew Mwenda who doubles as the founding director of the thriving Safe Boda group has fallen out with Museveni over the prolonged ban on Boda Bodas.

Mwenda who borrowed the Safe Boda idea from Kigali where he was doing espionage work for Kagame initiated the idea on Kampala streets about three years ago and today his company had boomed to enroll and accomodate about 20,000 Boda Boda cyclists.

But with the emergence of the novel Corona virus disease that stagnated the Ugandan economy, Mwenda’s Safe Boda was one of the unspared sectors which the government considered as potential conduits of the deadly virus.

SEE ALSO: Mwenda apologises to M7 over shs 5b scandal

In a Monday tweet beautifully timed at the immediate of Museveni’s televised fifteenth address, Andrew Mwenda has reinvented his once critical self to express his outrage over Museveni’s harsh remarks on Boda Bodas.

Whatever one’s views about boda bodas, the total revenue generated by them is Shs 13 trillion per year, 10% of Uganda’s GDP! They employ 1.2m youths and provide livelihood to 6m Ugandans! 90% of boda boda business is on passenger transport, not cargo! So open boda bodas NOW!!

We in the business of supporting unemployed youths own assets (boda bodas) from which they derive their livelihood have ideas on how to allow boda bodas carry passengers with little or no risk of spreading covid! Rather than make decisions alone, the government should consult us.