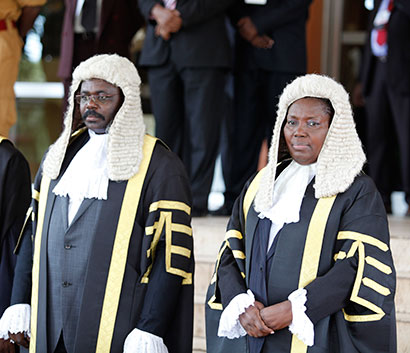 The row between the Speaker, Rebecca Alitwala Kadaga and her Deputy, Jacob Oulanyah yesterday took a twist when she denied the latter a platform to defend himself over the Covid cash scandal.

Oulanyah’s efforts to ask for audience went unanswered as Kadaga simply hurled a glare at him and suspended the proceedings. Oulanyah had wanted to defend himself against a motion of condemnation that targeted him for refunding the shs 20m that had been looted by parliament amid public outrage.

Oulanyah stood up and made several attempts to speak but Kadaga just continued to stare at him. Tired of the undermining, Oulanyah stormed out of parliament in protest.

Reliable sources however reveal that Oulanyah’s row with Kadaga is deeper than the Covid money. It is claimed that the two are battling for supremacy and control over the house. “Oulanyah is tired of being reduced to a mere biker. He wants to chair the sessions and yet his superior cannot let him,” says a legislator who spoke to this site. “Kadaga seems to have refused to bury the hatchet after Oulanyah nearly stood against her in the 2016 speaker polls,” the source adds.

Oulanyah however says he is displeased with Kadaga’s arrogant conduct. The legislator says he had on several instances wrote to Kadaga over the Covid money matter but he was not replied to date and yet a motion against him was tabled.

Pro-Kadaga MPs accuse Oulanyah of acting hypocritical when he distanced himself from the money he took part in passing as a member of the parliamentary planning committee that passed the shs 10b budget.