Museveni deserves a monument in every Ugandan town-Muhoozi 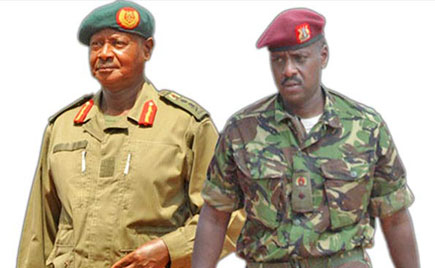 The senior presidential advisor on special operations, Lt. Gen. Muhoozi Kainerugaba has once again returned from his ‘honeymoon’ to make another controversial tweet weeks after the public is still recovering from his recent childish tweet about berets monopoly.

The idle tweeting general has this Thursday morning sang praises for his father reflecting on his active involvement in the 1980-1986 Bush war struggles that toppled the Obote II regime. Muhoozi who is predicted to be his father’s ‘next of kin’ is already resoundingly showing interests in national politics contrary to the UPDF act which hinders active serving members of armed forces from taking part in active politics. The first son at one point was quoted cautioning opposition members as sworn enemies of the state that will be ‘crashed’.

Muhoozi’s political behaviour clearly implies he is above the laws that regulate him through the UPDF act. Just this morning, the first son has tweeted that his father who doubles as Uganda’s longest serving tyrant deserves to be accorded maximum public recognition with a monument erected across all major towns in Uganda. Muhoozi further acknowledges that Rwandan militants; Paul Kagame and Fred Rwigyema were instrumental in Uganda’s struggle. The tweet has since drawn public criticisms with Ugandans questioning what exactly Museveni has done that is worth recognising. “Apart from corruption, what else can we remember him for?,” tweets one Ugandan. “If Amin who was patriotic and built institutions has no monument to-date, who is Museveni?,” asks another tweep. Below is the controversial tweet;