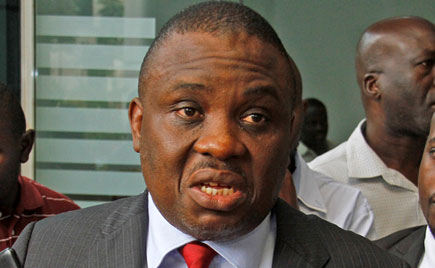 Kampala city Lord Mayor has reacted to the ongoing KCCA registration of commuter taxi and bus operators in the capital.

According to Erias Lukwago, the move is deliberately designated to aid the gradual government plan to totally phase out the commuter taxis and replace them with government owned commuter buses. Lukwago also intimates that taxi drivers who have already registered are now known. “The KCCA simply wants to know who owns these taxis. The registration has a skin deep motive that can’t be seen by the ordinary people,” he says. “This registration should be disregarded. It’s optional! Those who want, can go ahead with it but those who don’t, it is also fine, better and safer,” he adds.

The Lord Mayor says his cabinet disagrees with the KCCA central streamlining process which he says shall affect the livelihoods of the Ugandan plight employed in the transport sector. He says, their plan is divergent from what the KCCA is apparently doing. “We all want a good city for all Ugandans. Our plan was to register these taxi drivers under SACCOs of their own choice. We want to group them in small units,” Lukwago told the media.

Reacting to Lukwago’s accusations, the KCCA spokesperson, Peter Kauju said the Lord Mayor is just playing politics. “We are here to serve the people. Why again should we chase them out of the city. Where will we get the taxes if people are not in the city and who shall we serve?,” he asked. “We are just organizing and placing order in the taxi business, that is all,” he adds.

Taxi drivers who spoke to this site made revelations corresponding with the Lord Mayor’s thoughts. They believe all the current laws are a signal that their services are no longer wanted in the city. “They want us to pay the PSV license, own a route chart, a driver’s permit of class B, and all this can’t be possessed in a short time,” Mugerwa David, a taxi operator at Kisenyi park told this site.