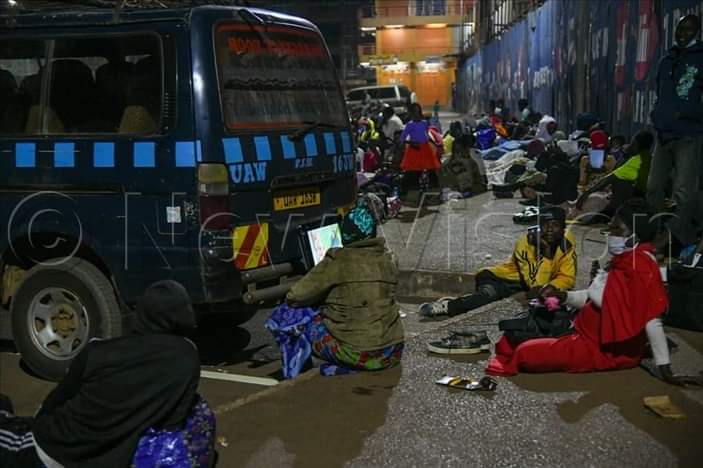 A horde of travellers spent their Thursday night in downtown Kampala taxi parks in fear of being arrested for flouting curfew hours.

Our reporter explored downtown parks of Namayiba, Kisenyi and the New taxi park only to find scenes of helpless people mainly women, children and the youths coping up with the piercing cold night infested with mosquitoes. The people had to spend a night in the parks since the resumption of public transport saw only a handful of taxis hitting the roads.

SEE ALSO: Only Registered Taxis to Resume Operations on Thursday

The scarcity of public means was triggered by the KCCA and transport ministry’s stringent rules that hindered unregistered drivers and taxis from hitting the roads again. Only those that had registered were allowed to operate on specific designated routes. “How would they expect us to register on time yet the lock down found us out of Kampala. We beg to be added more time,” reacts Kivumbi, a taxi operator. “Several taxis about 100 were on Thursday impounded on different police stations. This is why most of us opted to park our vehicles,” he adds.

The only few available taxis were scrambled for by the passengers who spent the entire Thursday in the park. Our reporter encountered even expectant months sleeping on the tarmac of the New taxi park.

Namukisa Alice, a pregnant woman we interviewed says, “Some people have already been kicked out of rented houses here in Kampala, they have no where to go than back to the village. I doubt any one would wish to sleep in the cold night on the ground but we have no choice. They were hopeful about transport being eased a bit. Who knows where they have been squatting before yesterday? Life is now tough.”