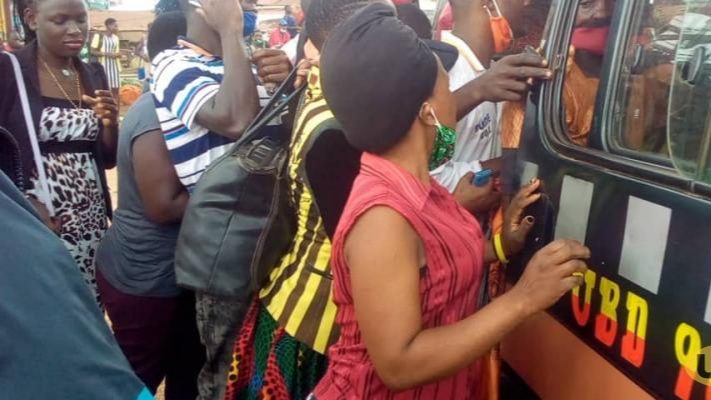 As the struggle for the limited number of taxis and buses continues in city parks amidst hiked fares, some travelers are exploring alternative means to get to their destinations. Hundreds of travelers stormed various taxi and bus parks in Kampala on Tuesday following the resumption of public transport, two months after it was suspended as part of the Covid19 control measures.

Teddy Namakula packed her bags and readied her five children for travel to Kyampisi village in Mukono district on Thursday when she heard that President, Yoweri Museveni had lifted the suspension on public transport. According to Namakula, at exactly 6:00am she set off from Kakiri heading to the taxi park in Wakiso to catch a taxi and return to her parent’s after failing to meet her bills and provide for the children.

“Only two taxis were in the park charging Shillings 10000 to Kampala,” she said. Namakula was forced to borrow money from a stranger who gave her Shillings 5000. She explains that on arriving in Kampala, taxi operators were charging Shillings 20,000 to Mukono.

Namakula decided to stage along the Northern bypass in Bwaise hoping to jump on a truck with her children to Mukono.

Edith Naiga, another traveler passenger who our reporters found grumbling at Gayaza stage after trying to board taxis to Kamuli in Busoga in vain, said she had given on taxis and opted to get a lift from truckers.

Frank Sande was heading to the city center after walking from Luweero to Bwaise with the hope that he will get a taxi to town. Sande, who was found resting to regain some energy, said there was a huge transport problem because of fewer taxis on the road.

He said transporters had taken advantage of the fact that several people want to get home to double the fares. “When everyone learnt that there is a general problem in movement, they want to use this advantage and extract a lot of money from people. I tried to get a private car and it was charging Shillings 20,000. So I decided to keep on walking until I find a truck driver,” he said.

Herbert Kiwanuka, another traveler said getting a taxi is hard since people are just fighting to enter. He explains that he was told that it was easy to pick a taxi at Bombo road to Lira at Shillings 50,000.  He however, failed to get any adding that the private vehicles he got were asking for Shillings 100,000, which he couldn’t afford.

Kiwanuka told URN that he would return home should he fail to get a taxi that is charging less. Taxi operators have generally increased the fares since they are carrying half of their usual capacity to ensure physical distancing of passengers.

According to Khalid Lutaya, the Secretary Mityana-Mubende stage at Nateete Park and New Taxi Park, the fares to Mityana has increased from Shillings 7000 to 12000, passengers to Kyegegwa are paying Shillings 25,000 from Shillings 15000 while Kikandwa will increase from Shillings 13000 to 18000.

Muhamad Kimera at Bugerere Stage in Nateete, says Kijabijo, Nakasajja, Kalagi, Najjalaama and Nakifuma, Nateete to Nakifuma will raise from Shillings 5000 to about Shillings 9000, Kayunga will cost Shillings 10,000 from Shillings 6000 to 10,000.

Apollo Karugire, the secretary at Buloba-Bulenga Stage In Nateete, says the fares will raise by Shillings 1000. For instance, fares to Buloba will raise from Shillings 2000 to 3000, Bujuuko from Shillings 3000 to 4000. Karugire says they cannot double fares because passengers might not afford them since most of them were also affected by the lockdown