‘Eat your Mirra and back off KCCA,’ Kauju warns Full Figure 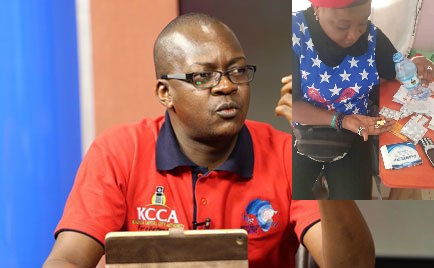 The Kampala Capital City Authority spokesperson, Peter Kauju has fired shots at the self proclaimed ‘senior presidential advisor’ over what he describes as meddling in their taxi registration exercise.

Kauju’s harsh comments follow Full Figure’s Saturday remarks about KCCA when she accompanied Sylvia Namutebi famed by her alias, Maama Fiina who had made an impromptu trip to the New taxi park. Maama Fiina had rushed to the rescue hordes of stranded lactating mothers and helpless women who had since Friday, June 4 slept in the park. The women had decried the skyrocketing fares which shot by double as taxi drivers claimed half capacity was less profitable.

Maama Fiina who is largely known for her generosity cleared about 100 taxis to transport all the stranded passengers. In her address after the charitable act, Maama Fiina appealed to her boss, Museveni to turn a deaf ear to self seeking ministers like Betty Amongi who she claims want to fail him in Kampala.

At the same occasion, renowned motormouthed reprobate, Jennifer Nakabuubi alias Full Figure took over the show and started pelting insults at the KCCA leadership. “Those KCCA leaders are fools. How would they register when the lock down is ending?,” Full Figure fussed. “They had all the time to do that but comfortably sat in their homes. These are people who want to fail Museveni,” she added.

Her comments were instantly counteracted by Peter Kauju who described her as an insane drug addict without ideas of governance. “What does Full Figure know about running a government?,” asked Kauju. “What position does she even hold? Who voted for that mad woman?,” he adds. Kauju further advises her to keep to her weed smoking and drug addiction to avoid being embarrassed. “Let Full Figure keep in the slums on her mirra. She has nothing to tell the public. She is visibly a maniac and an insane lady not worth any attention,” he warns.