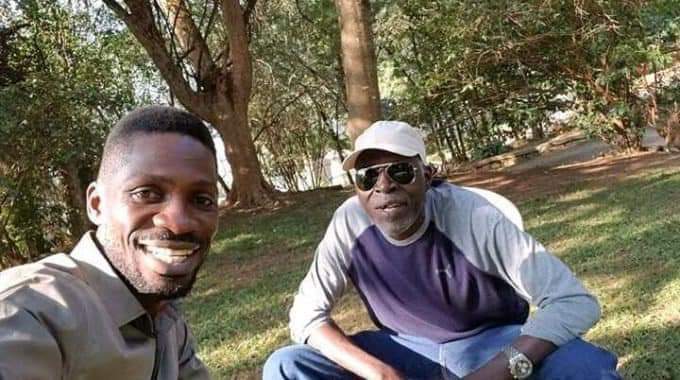 Maj Gen Kasirye Ggwanga has been a spicy mixture of humorous roguishness and hard work, whether on the battlefield or on his farms.

Gwanga’s open love and admiration for the Kyadondo East MP Robert Kyagulanyi Ssentamu alias Bobi Wine has landed hm into trouble. When it comes to showering praise to the presidential hopeful, the motor mouthed former Idi Amin soldier could not mince his words.

Below are some of the open declarations about Bobi Wine that could have opened the dungeon gate for the under fire general.

Gwanga warned the government over the impending danger that would befall the establishment should they ignore the man he described as being a smart planner.

“He is a good man and very smart. They are messing with Kyagulanyi, he is like Kasirye Gwanga, he sizes you up and he takes his time,” he said of the presidential aspirant from Magere.

He however cautioned that the big swarm of failed politicians flocking around him would cause him failure unless he treats them off early enough.

“If he is left alone, he will go a long way. But if he mixes with failed politicians, his road to nowhere is already waiting him,” Gwanga observed.

Major General Kasirye Gwanga once again cautioned the different security organs not to dare torture Kyagulanyi again since he was a child of the NRM whose late father had done a lot of work helping the liberation forces of the NRA in terms of food and logistics. He went ahead to warn that he was not willing to look on as the son of a historical liberation collaborator was being tortured for seeking meaningful change.

“This boy is our child because his father helped us during the war and as Maj Gen Kasirye Gwanga, I wouldn’t want to see any one from security to torture him anymore he also have his views he would want the government to look into and get solved,” he said while commenting on Bobi Wine’s physical altercations with security forces in Arua.

He attacked the government and its security forces for refusing Bobi Wine to organize his music concerts in what he called unfair persecution.

“If I were the one, I wouldn’t block his music concerts. Why refuse Bobi Wine to sing? It instead increases his support and popularity,” Gwanga said while appearing on NTV.

The retired General shocked the country when he openly confessed to being the brain behind preparing the people power strongman for the greatest political office in the land while being interviewed on Buganda kingdom owned BBS TV in Mengo.

“About Bobi Wine, I am training him to be the next president come 2026,” he said before adding that the Kyadondo East MP would however have to wait until Museveni gets out of the equation in 2026 before he would be able to dream of victory as he also does something about the bad company associated with his People Power Movement as it was a recipe for bad publicity.

Asked about what he thought about life after president Museveni, Gwanga who did not sound satisfied said he wishes the country’s head would consider retiring so he would give way for a better leader to raise among the many good children born during his reign.

“Yes, I wish we get someone better. I have beautiful children I made during his reign. I want to see him retire. But where will he go?” Gwanga said.

It’s against this background that the military was deployed at Gwanga’s home to keep his already suspicious actions with Bobi Wine under watch. His refusal to have the military at his residential facility therefore was a direct call for the obvious – Detention.

Ggwanga bashed some army officers who believe that should be treated specially since they fought. “No one sent you [to the bush]. You did that on your own,” Kasirye said.

In his condolence message, Bobi Wine has said that he had the opportunity of being his friend over a long time as quoted below:

The news of the death Gen. Kasirye Ggwanga is shocking. I had the opportunity of being his personal friend over a long time. We agreed and disagreed on many things, but every time I met him, there was a lot to learn.

Like many prominent people in this country, Gen. Kasirye’s arrest, detention and eventual death is shrouded in mystery. Like many Ugandans, I am hoping that those in authority will provide satisfactory answers. May his soul rest in peace.