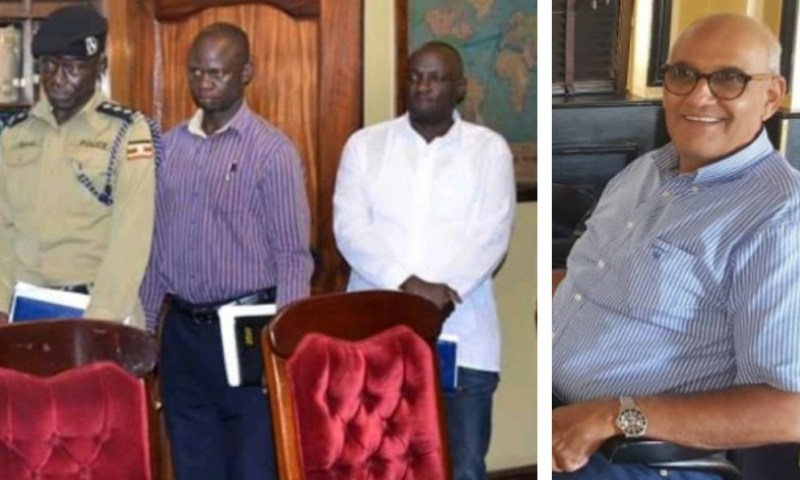 Emerging reliable reports we are getting indicate that the office of the Directorate of public prosecutions has dropped all charges against the Kassanda police bosses and their Asian boss, Abid Alam.

In a letter dated June, 1 with Justice Jane Francis Abodo’s signature appended on it, our site has exclusively learnt that the office of the DPP dropped the charges way back in late May. Yesterday, a closed court session without journalists was presided over by the Buganda road magistrate, Joan Kate Acaa who pronounced the judiciary’s position in the case where she out of nowhere read the statement and declared the accused free. It was unclear with how the state unanimously resolved to drop the charges in such a highly sensitive case that has afflicted pain to the victims of the Wamala Farm Entreprises proprietor. Also set free were the police officers who were accused of distorting facts in Abid’s cases as they allegedly hid criminal files. The four are; SP Wilber Ostin Wanyama, Wamala region CID officer, DPC Kassanda, ASP Daniel Owellano, OC CID Kassanda, ASP Peter Beitera and Sgt. Azale in charge CID records Wamala region.

Our private investigation reveals that the troubled Asian business mogul is a personal friend to Gen. Salim Saleh who is a brother to president Museveni. It is believed that the duo privately sat down and agreed to set Alam free on condition that he compensates Maj. Arthur Mugyenyi, whose farm, Abid’s men raided and razed on the night of April, 3, 2020. Ekyooto has learnt that Maj. Mugyenyi’s father, a confidant to president Museveni’s father privately rang the head of state and informed him of the matter which explains the immediate action he took to apprehend the troublesome Asian. However, it is not the first time that the powerful Abid Alam is walking away free even after committing serious crimes. On 29, November, 2017 Abid was relieved of murder charges as the state claimed the witnesses gave conflicting accounts. It later turned out that the witnesses were threatened by Abid’s men and they opted to detach from the case.