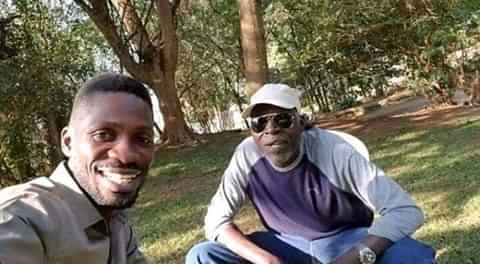 Controversial retired Maj.Gen Kasirye Gwanga is reportedly dead. He has been in Intensive Care Unit (ICU) at Nakasero Hospital. The presidential advisor on Security Affairs in Buganda Region was admitted “with a collapsed lung”.

He was first admitted at Mbuya army diagnostic centre last month. The latest information from his family friends at Nakasero hospital revealed to us that Gen. Gwanga, was rushed to the hospital after his health condition deteriorated with a collapsed lung.

Kasirywe Gwanga wrote a terrifying will a couple of days ago before his situation worsened.
1. My body must be cremated and my ashes should be kept in Museum.
2. I have bequeathed My farm Camp David to the army.
3. I gave my children a good education and they have everything they need, no one should take any of my property.
4. Money on my bank accounts will help my several concubines and their dependants. My daughter has the list.
5. All the other properties are for my dear wife.
6. I bequeath my bush war uniform and my gun to Museveni’s son Gen. Muhozi
7. Commander in Chief Gen. Museveni must salute my body before cremation.

Who Was Maj.Gen Ggwanga?

In 1972 was recruited into the Uganda Army. He was posted to Arua as a map instructor until 1978, when he was promoted to an artillery officer and later staff sergeant.

With the fall of President Amin in 1979, the Brigadier was among those arrested and sent to Luzira Prison, where he spent over two years.

When he was released, he briefly quit the army, concentrating on maize milling. But when his brother was killed allegedly by President Milton Obote”s army men, Kasirye joined the Freedom and Democracy Movement based in Buganda.

When Obote”s regime fell in 1985, the Brigadier refused to join the Tito Okello government. Instead, he joined the National Resistance Movement. He retired from the army in May 2005 but later said he couldn”t handle “civilian” life. He was the Mubende district chairperson from 2006 to 2011.