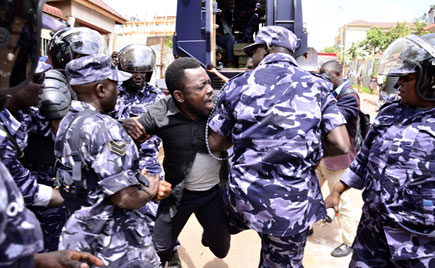 As highly anticipated, the temple of justice has dropped charges pressed on Capt. Richard Lubeera and his troops who reportedly tortured Makerere University students during a tuition strike in November, 2019.

Capt. Lubeera and his men reportedly broke into students’ halls of residence and battered the deaf, blind and the handicapped residents of Lumumba and Mitchell halls. The same troops acting on the orders of the principal of college of business and managerial sciences, Prof. Eria Hisali broke into the female students residence of Mary Stuart and molested the young girls.

The gruesome images of molested and tortured girls and disabled students enveloped social media and triggered international outrage over how the government of Uganda was mistreating harmless civilians.

Court ruled that Capt. Lubeera, Sunday Ocira and team can walk away free after prosecution failed to produce substantial evidence against them. The judge ruled that by the virtue that no student leader turned up in the courts to testify against the accused officers, it clearly means they may be innocent since the constitution has that notion of presumption of innocence till one is proven guilty. This prompted the trial judge to temporarily drop the charges on the accused.

We contacted student leaders who revealed to this site that they were not even aware of the trial. “We didn’t know about this case. We only saw in the news that Lubeera and his men were arrested and are in military custody at Makindye. Court did not invite any of us to testify,” says a leader in the 85th GRC who spoke off record.