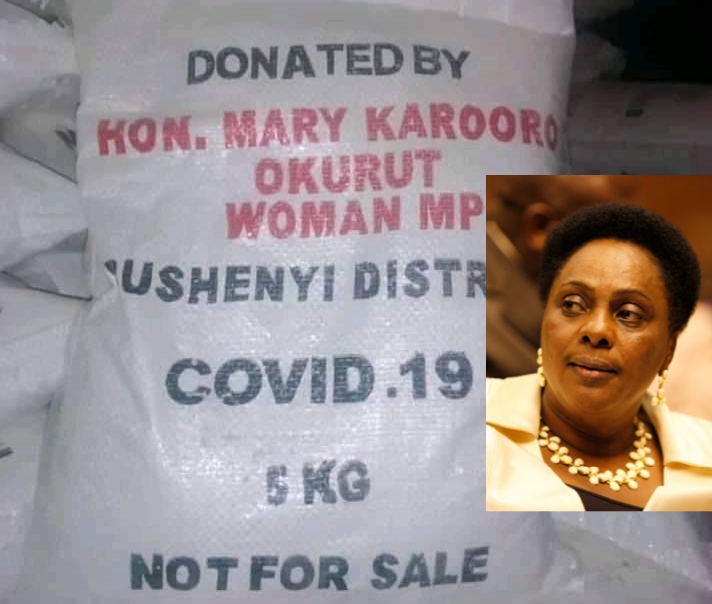 The honourable Minister without portfolio and Bushenyi female representative, Mary Karooro Okurut is reportedly distributing part of the national taskforce food in her constituency in Bushenyi district according to reliable sources.

Karooro, who holds a juicy slot on the national taskforce had earlier ill advised the president against nationwide distribution of food claiming the budgeted shs 59 billion was insufficient. But on the contrary, as Ugandans were wondering where the tonnes of food donated by organisations and individuals has been going, our sources intimate that Karooro and team have been hiding consignments of this food and relief aid in some warehouse in Bweyogerere, Wakiso district.

Yesterday, one of her warehouses was invaded by police after people in the neighbourhood tipped off the security. “We usually saw a government truck ferrying in tonnes of maize flour into this warehouse,” says Lubwaama, a resident in Bweyogerere. “What surprised us was the rebranding of the packaging materials. Why was the food being repackaged in containers inscribed with the names of Minister, Karooro,” he wonders.

It should be noted that government called off the food distribution programme after Prime Minister Ruhakana Rugunda reported that they had run out of funds to purchase more food. Whereas a targeted population of 1.7 million in Kampala and Wakiso was hit, thousands were left to starve and have to-date never even received a grain of maize.