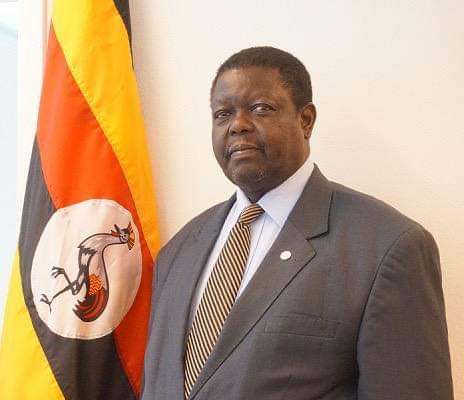 Emerging reports we are receiving indicate that the Ugandan envoy to Geneva, Switzerland has succumbed to the novel Corona virus disease after days under the Intensive Care Unit.

H.E Christopher Onyanga Aparr reportedly breathed his last on Wednesday at a local Geneva hospital. His death was announced by a top source at the Ugandan mission in Switzerland.

Being a top diplomat, unlike other ordinary citizens, the deceased is entitled to repatriation on a chartered flight and will be accorded a honoury state burial.

We could not get more details but we are following up the matter keenly and we shall keep you posted in case of further developments.

Onyanga championed the cause of the LDC Group in trade negotiations on trade facilitations, agriculture, NAMA, Trade in Services in preparation for Bali Ministerial Conference (MC9) in Indonesia.
At the UN, he was involved in discussions and formulations of binding principles and regulations as applied by affiliated organisations like HRC, ITU, WHO, ILO and UNCTAD.

Before that, Onyanga held various positions in the Government of Uganda, namely; Senior Government Valuer in charge of Land and Real Estate appraisal in the Ministry of Lands and Mineral Resources; Chief Estates Officer in the Ministry of Housing and Urban Development in charge of management and protective maintenance of Government properties. He was also Board Director of Transocean (Uganda) Limited, in charge of transportation, freight and clearing of goods and services.

Onyanga also held the position of principal national housing officer in the National Housing and Construction Corporation, carrying out construction and management of housing estates to increase housing stock in the country.
In this capacity, he handled a number of housing projects in the country, amongst others, to enable the citizens own personal landed-properties.