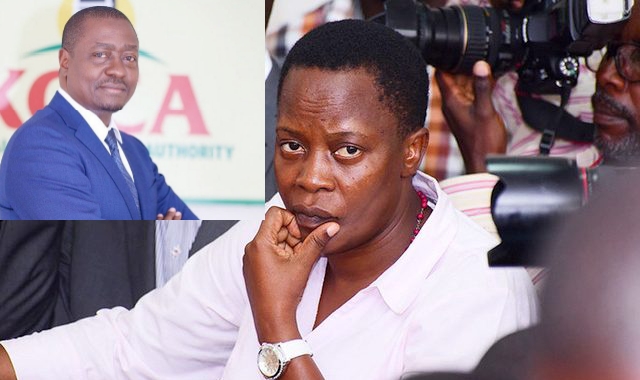 SEE ALSO: Minister Aceng appeals to Museveni for another lockdown

Nambooze says the move corresponds with the suspense which Ugandans have earlier raised in the entire testing for the deadly virus where majority suspect foul play. Even in today’s budget speech, president Museveni took a swipe at the health Ministry officials for providing false results for reasons best known to themselves. The 76 year old dictator accused health Ministry experts at the Makerere University testing centre for cooking up their own results.

Last Friday, there was panic at the KCCA city hall when some 4 staff members were allegedly confirmed to be positive to the virus. This compelled the Minister for Kampala, Betty Amongi to force the Lord Mayor and his cabinet into the mandatory isolation, a things they strongly opposed. Nambooze says, this was a connivance by KCCA officials who wanted to loot money from the supplementary COVID-19 budget.

What Ugandans have always suspected is at KCCA with evidence: As the alternative Minister to Kampala I told the Press that at the earliest, I am to move Parliament to interest it’s self in the happenings at KCCA in relation to Covd money.

This I have based on the imformation and evidence I have which shows that top directors at KCCA connived with the Ministry of Health Officials to give some if the employees of KCCA +Covd results,confined then in hospitals when the fact of the matter is that they are not sick or carriers of Covd.

Am to move Parliament to examine the role of the two lady Ministers for Kampala. At the same press briefing I have staked my honour to the fact that Ag.ED of KCCA Kitaka has already booked his ticket to Luziira.

Imagine these fraudster the Kauju and group pretended to be in self Isolation because of the non existent positive Covd results! They also attempted to technically kick out the Lordmayor by attempting to force him into a quantine.

I have received disturbing information that there was plan to declare the Lord Mayor sick so as to be dragged into hospital confined and maybe declare him whatever they would choose for him.

The technical staff at KCCA should know that the Rule of the Law General has never lost to anyone and here we are….as ,Omulokole Jane Ruth Aceng jumped out of the deal and the KCCA Covd lumpens have exposed Uganda before the World community….We may ask how many more people being held as Covd Patients are just victims of the system volongoto leadership?!