Uganda to fly flag at half- mast to honor Nkurunziza 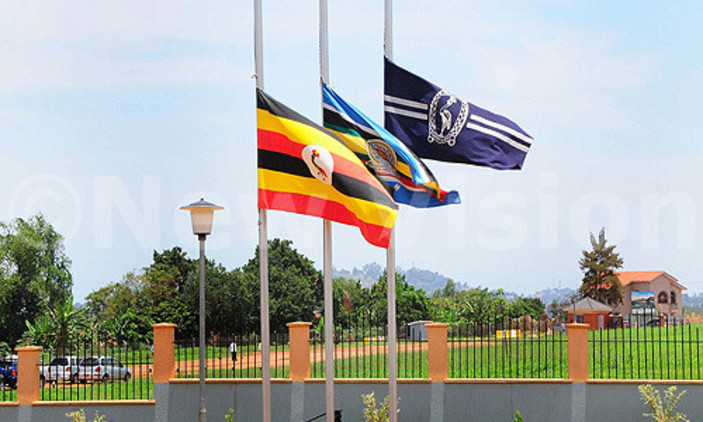 President Museveni has on Friday directed that the Ugandan flag and that of the East African Community must be flown half-mast from Saturday to honour Burundi President Pierre Nkurunziza who died on Tuesday. In a statement issued at State House on Friday, Museveni ordered that both flags should be flown at half-mast at all public buildings and public grounds from dawn to dusk on Saturday June 13.

He further directed that flags in all public places in the country and at all of Uganda’s Diplomatic Missions abroad should also fly at half-mast. Museveni said it also serves as a mark of respect for the memory of President Nkurunziza who he described as a true fried of Uganda and a champion of the East African Integration.

“Burundi and the region will miss Nkurunziza’s talents and the invaluable contribution he was well positioned to make towards the consolidation of peace and stability in Burundi and the region, following his departure from office in a few months to come”. Museveni said.

In a statement issued by Burundi Government Spokesperson Prosper Ntahorwamiye, the late president attended a volleyball match on Saturday afternoon and was taken to hospital in Eastern Burundi that evening after falling ill. Mr Nkurunziza suffered a heart attack. “He started feeling unwell on Saturday evening and was rushed to a hospital in Karusi Province. His health deteriorated on Monday morning and he got a cardiac arrest.  The doctors did everything possible to save his life,” said Mr Ntahorwamiye.

Before joining politics, the late Burundi President was a teacher and assistant lecturer at the University of Burundi. Following the civil war of 1993, Nkurunziza emerged as the leader of the Forces for the Defence of Democracy (FDD).

With the 2003 peace deal, he was named Minister of Interior before Parliament elected him President in August 2005. After 15 years in power, Nkurunziza was due to step down in August. His death comes barely three weeks after the national elections which his party candidate Evariste Ndayishimiye won with 68.72 per cent vote.

The Burundi government has since declared a period of national mourning for seven days from Tuesday with flags flying at half-mast, with further communication being made in regards to Nkurunziza’s funeral.

The late President will be remembered for his great love of sports, particularly football to which he owned his club, Hallelujah FC.