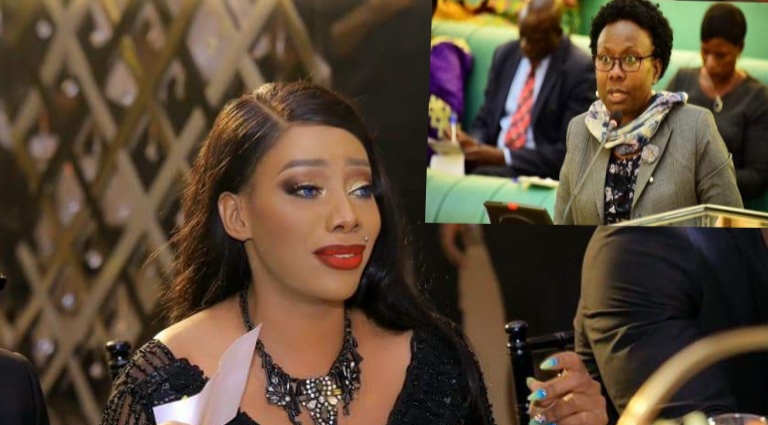 Renowned self styled unapologetic composed reprobate and self proclaimed head of the sex workers in Uganda, Shanitah Namuyimbwa largely famed by her alias ‘Bad Black’ has sued the Ministry of Health and the Government of Uganda for refusing to clear her cheque following a COVID-19 advert she made on a contract.

In the advert, Bad Black rallied her fellow sex workers to distance themselves from truck drivers in this season of the deadly Corona virus disease. Black says, her 3 minute advert which runs on all televisions on a daily basis has not been cleared to date. In a letter issued through her advocates on Saturday, Bad black sought a whooping compensation package worth shs 500m for the advert, and another shs 50m for the psychological damages afflicted on her by the delayed pay.

“I really don’t get it right when I see the Health Minister, Jane Ruth Aceng post my ad on their pages. In addition, it is even a big shame because they didn’t pay for my creativity and also they don’t pick up my calls. Shame on all the people who were involved however come rain, come sunshine, they will have to pay me,” fumes Bad Black.

Black says on April, 29 this year when the truck driver cases soared, the Health Ministry delegated a one Kisembo Tembo to her residence with the intent of shooting an advert creating awareness about the virus. The Ministry reached a decision to hire out her services on the basis that she seemed influential and had a massive following within the circles of sex workers. Black says, she heeded to the Ministry’s plea after being promised a juicy pay cheque for the deal.

She was also promised a meeting with Museveni in which she would be pronounced the official ambassador for the sex workers in Uganda. Black says all this never went as planned because some officials in the Health Ministry just ‘used and dumped’ her after getting the advert.

Masangala advocates on behalf of Bad Black have asked the government to pay their client shs 500m for the advert and another shs 50m for the damages.