Our sole purpose is the liberation of the country, we choose non-violence-Bobi Wine 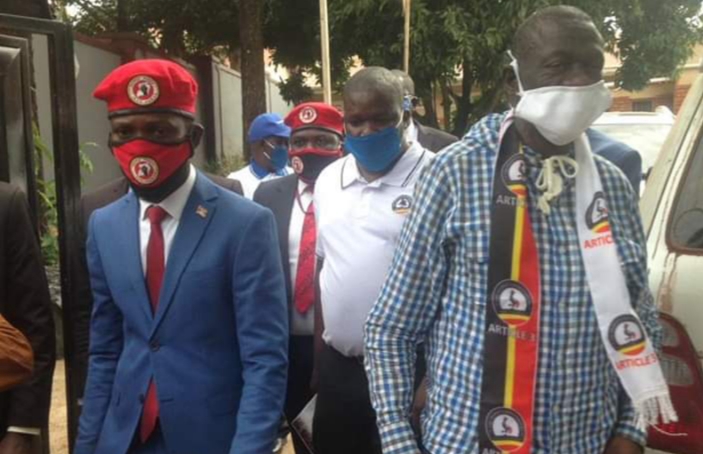 The long awaited unity between Uganda’s opposition forces of The People’s Government, People Power movement and other sister parties today convened in Wakiso district to react on the ongoing autocratic rule of Yoweri Museveni. Only the UPC and Mugisha Muntu’s Alliance for National Transformation party didn’t attend. The Monday, June 15 meeting came moments after Mr. Museveni who had vowed to crash the opposition appeared on Television saying, ‘he has started enjoying the sweet taste of the presidency’. Sources say Museveni and his NRM MPs plan to hold a scientific election secretly where campaigns will be done on radio and TVs something the opposition say won’t work in their ‘No Nedda’ campaign.

The People Power principal, Robert Kyagulanyi Ssentamu alias Bobi Wine united his side with Uganda’s veteran opposition leader, Dr. Kizza Besigye and his People’s Government in a live televised press broadcast which was later cut short by the military Junta which deployed at the venue moments into the commencement. The spokespersons for both ends, Betty Nambooze and Joel Ssenyonyi were seen exchanging moments of joy as though they had been awaiting for this specific moment.

Bobi’s amazing submission was introduced by a rejoiceful lyrical tune titled ‘United forces of change’ in which he sang about the need to unite Ugandans to press for their liberty which has been grabbed by the 76 year old telegenic tyrant. It has always been in the interest of the Junta to keep the opposition disunited by using invisible social media forces to rally one group against the other and this is something that the forces realised and decided to put an end to. Bobi urged Ugandans to rise in a peaceful manner and demand for their freedom that has been grabbed by the what Dr. Besigye described as the 1% group in power. Before gunmen reined into the presser, Bobi had concluded with a reminder that the appropriate time for Ugandans to liberate themselves was now and he maintained that this could be realised with a peaceful approach.

As Dr. Besigye was remarking about the need to use defiance as a means to unseat the violent regime of Museveni. Before gunmen raided the presser, Besigye had emphasised the importance of stopping Museveni’s nomination for the next general elections. The leaders were emboldened to unite firmly and decisively respond to Museveni’s glaring illegalities in the covid fight that has left Ugandans poverty stricken and some have lost lives to security forces guising to be implementing directives.