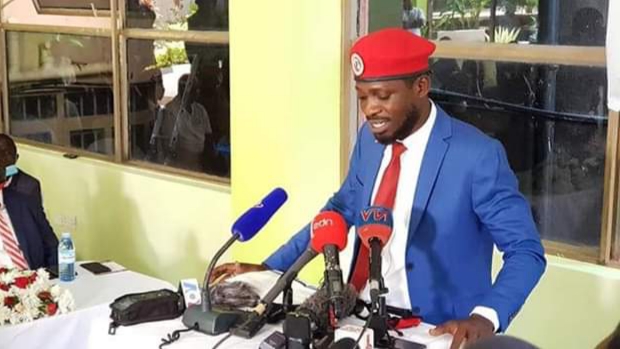 The Kyadondo East Mp Robert Kyagulanyi Ssentamu aka Bobi Wine who’s is vying for the big office in the country has issued a statement on the new Electoral Roadmap dismissing it. Earlier today, the Uganda Electoral commission issued a new 2021 Electoral  Roadmap where they proposed online campaigns for 2021 polls.

This has brought about some mixed reactions from both members of the ruling government and those on opposition though most of the ruling members have welcomed the idea. Bobi Wine, the leader of the People Power Movement writes dismissing it:

If anyone still had any doubt that Uganda’s Electoral Commission works for and on behalf of President Yoweri Museveni and his regime of blood and shame, today the Commission exposed itself for the whole world to see.

In the most ridiculous fashion, the Commission has released a revised roadmap for the 2021 General Election; which roadmap violates every aspect of a free and fair election, envisaged under Article 1(4) of the Constitution of Uganda.

The media earlier reported that the roadmap was generated from a meeting between the Commission and President Museveni, who is a prospective candidate in the next election!

The Commission is essentially communicating a decree from President Museveni, who as all Ugandans know is very afraid of competition and has used the COVID19 pandemic to further tighten the noose on opposition political activities.

The most outstanding mockery in the released roadmap is the notion that campaigns and elections shall be held digitally- following Museveni’s directive that they hold what he termed a ‘scientific election’. Other stakeholders including political formations, traditional and religious leaders, civil society organizations, etc. have not been consulted!

It defeats logic that Museveni, who has already declared intentions to run in the election, is the one giving orders to the Commission.

We therefore reject the concept of a ‘scientific election’ with the contempt it deserves. What the Electoral Commission just declared is in fact not an election. It is a mockery. Section 20 of the Parliamentary Elections Act, 2005 as well as Section 21 of the Presidential Elections Act, 2005 both envisage holding public campaign meetings across the country.

President Museveni and the Electoral Commission do not have power to issue decrees to alter clear provisions of the law.

The true reasons why President Museveni is pushing for ‘digital elections’ are clear;

(i) He is afraid of the masses of hopeful Ugandans who have always converged around us wherever we have gone. This is the same reason why he blocked our consultative meetings, in blatant violation of the law.

(ii) Museveni is aware that majority of the people of Uganda, who he has deliberately impoverished cannot afford TVs, Radios and smart phones to enable them access our message of change. He is therefore trying so hard to ensure that our message of truth does not reach the people of Uganda in Karamoja, Kisoro, Kaabong, Kaberamaido, etc. According to the Rural Electrification Agency, only 28% of Uganda’s population have access to electricity. Museveni is deliberate about ensuring that the 72% of the people of Uganda who have no access to electricity are shut out of the election process.

(iii) Previous Supreme Court decisions have clearly highlighted widespread ballot stuffing at polling stations even in the presence of agents and other people at polling stations. Recently in Hoima, this was done in full view of cameras! What would happen if ordinary citizens and agents are kept away from polling stations? This is what the regime is desperate to achieve.

(iv) Every Ugandan knows that Museveni has since grown old and tired. He has previously stated that a person after clocking 75 years of age, lacks the vigor and stamina to run for office later on run a country. As always he reneged on this promise. He now sees an opportunity in COVID19 to avoid the embarrassment of probably collapsing at a campaign rally.

(v) As all Ugandans know, the Museveni regime has monopolised the media, barred opposition leaders from being hosted on many radio and TV stations, etc. In addition, most radio stations in up country locations are owned by regime functionaries and henchmen. Decent Ugandans who own radio stations have often been ordered by RDCs, DISOs etc not to host opposition leaders or risk losing licenses for their stations. With this state of affairs, Museveni will want to use his loot of national resources to book all these stations in advance and prevent any voices of dissent on these stations!

In summary, Museveni is doing this to rig the election out rightly. He is staging a coup – a kin to what happened in 1980 that led him into a bush war in which so many of our people died! The oppressed people of Uganda WILL NOT LET HIM DO THIS. We shall resist him and his thuggery!

We are mindful that the coronavirus pandemic is real and dangerous. However, dictatorial regimes such as Museveni’s decadent regime must not use the virus as an excuse to trample on whatever is left of democratic rights.

Regarding holding elections in the midst of this pandemic, many Ugandans have put forward logical proposals which ensure that the public health of Ugandans is not compromised, while ensuring that their democratic rights are not taken away. For example, if the government provided masks to all Ugandans and ensured that campaign meetings take into account social distancing, this would be plausible.

Secondly, Article 77(4) of the Constitution provides that where circumstances exist which would prevent a normal general election from being held, Parliament may, by resolution supported by not less than two-thirds of all members of Parliament, extend the life of Parliament for a period not exceeding six months at a time.

These are possible alternatives, and if all stakeholders were consulted, more alternatives would be brought forward. We would rather extend the election by a few months than have a joke in the name of holding an election!

Finally countrymen and women, we want to encourage you all not to lose heart! Whatever Museveni has been doing since the emergence of the People Power Movement is a clear indication that he is so scared of WE THE PEOPLE. I promised the country when our consultations were blocked that before the 2021 election, the regime would even do more ridiculous things! Here we are!

On our part, we are getting ready to take on the despot come 2021. We shall lead Ugandans into a campaign that is provided by the law! Museveni may think he is organising a cosmetic election to just have his way, but he will be in for a big shock- LET EVERY UGANDAN DO HIS OR HER PART.

No amount of intimidation; no form of machinations; no level of trickery will save Museveni and his regime from the inevitable downfall that awaits them! Let us do what we have been doing and even do more. Let us rise up and defend the Constitution which is being toppled yet again! Freedom is in sight.

We have kick-started conversations with other comrades in the struggle and we shall communicate to the nation what comes next.