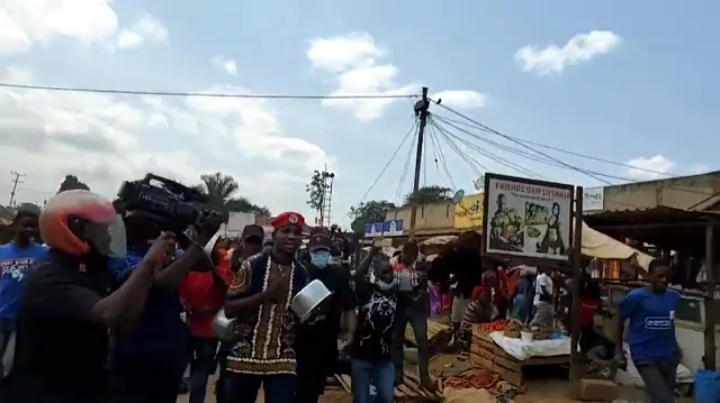 Accompanied by a wave of cheering and whistling women, children and youths, Bobi combed through low scale slums of Kyadondo East preaching carrying a saucepan as a symbol of hunger that is ravaging the unemployed mass. He kept reminding them of how their rights have been over stepped on by the government guising as front liners in the Covid fight. “Dear Ugandans, Boda Boda cyclists, taxi drivers, vendors, touts, and all those in the informal sector. The time is now to ask for our rights,” Bobi said to the masses. “We passed shs 59 billion for your food but how many of you have got it and it is of what quality,” he added. “Mulina okwebelemu kuba teli agenda kubabelelamu (you have to rise because there is nothing for you without you),” he urged.

The peaceful protest was streamed live on his Facebook for about five minutes before it ended with him getting into his vehicle. Unlike the usual deployment at his residence and the trail of his movements by the police, Bobi today took the security by unaware. In fact, through out his sensitisation drive, for the first time no single gunman turned up to detract him from his move.

The No Nedda campaign was launched on Monday by the joint opposition forces under their ‘United Forces of Change’ umbrella. On the day one of this drive, eight People Power activists were arrested and on Wednesday remanded to Kitalya prison till June, 22. Besigye and his People’s Government too embraced the campaign on its inception. Our reporters around the city say, Ugandans are slowly adopting the campaign as a means of breaking the chain forcefully thrust on them by the 35 year old militaristic government of Yoweri Museveni.