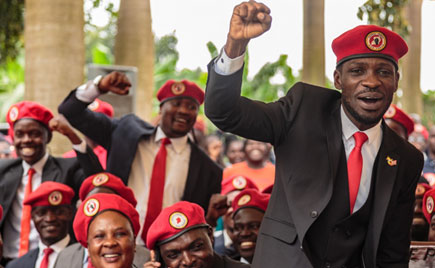 The People Power youth leaders have warned the EC chairperson, Justice Simon Byabakama to either rescind the scientific elections model or face the ‘music’ that may arise from this amendment.

In a Friday presser held at the Kamwokya based People Power headquarters, the visibly angry youths passed on a sound warning to the EC chairperson to act within the grace period of 4 days and reverse their amendments.

“We have given them 4 days to revise their decision to implement unconstitutional means ‘Sceintific elections’ as a way to organize the 2021 elections,” said Lugya, one of the People Power youth leaders. “We are the majority population in the country, but the minority are taking decisions without even consulting our position and contributions,” he added.

The youths resolved to hit the streets at the close of the 4 day ultimatum. After the presser, several of them rallied Boda Boda riders, vendors, mechanics and taxi drivers and rode through streets of Lugala-Masanafu in Rubaga division as they preached the gospel of change to other oppressed Ugandans in the informal sector.

It should be noted that the scientific elections only favour, catalyse and promote the ruling NRM party candidates who seem to be favoured since a great deal of mainstream media houses belong to their own members. For the record, opposition politicians have been blocked by RDCs acting on presidential orders barring the former from speaking at local radio stations.