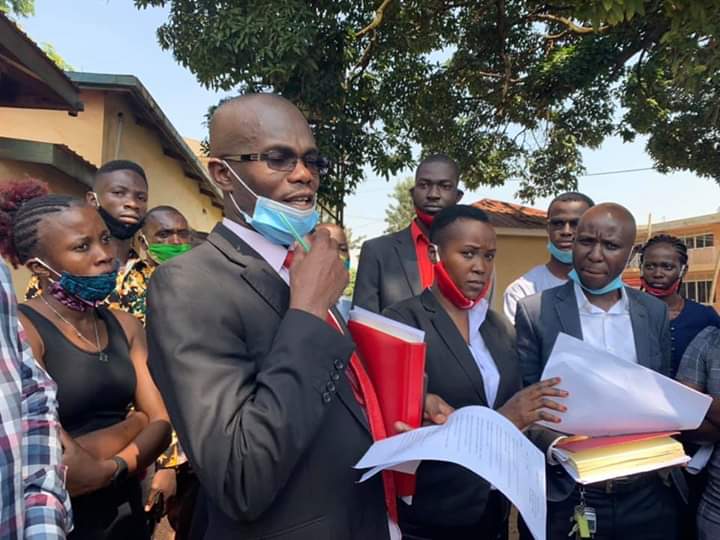 Today was supposed to be the trial date for the incarcerated eight People Power activists who were a week back arrested in Makindye as they marched through Salaama road street banging saucepans in line with the ongoing ‘No Nedda’ opposition campaign.

The eight have not been arraigned in court as earlier communicated but instead the magistrate just adjourned to a later hearing date. People Power lawyers: Gerald Owiny, Shamim Malende and Anthony Wameli were by morning present at Makindye grade one court only to be referred to the city high court where the case was shifted to at the eleventh hour.

The prisoners were not physically brought to court and their file was read in their absence. The trial magistrate, Her Worship Irene Nambatya fixed the matter for July, 1 2020 for plea taking and bail applications which will be conducted via video-audio link in Kampala High Court.

The eight suspects are being charged with three counts including i) incitement to violence, ii) conspiracy to commit a felony, or iii) unlawful society.

Political activist, and Kampala woman MP hopeful, Dr. Stella Nyanzi who was present at the court fumed at the judicial system which she reduced to a mere temple of ‘injustice’. “I am enraged by the deep injustice and irregularities of the police who abused the criminal justice system in the case of the eight peaceful protesters,” remarks Stella. “Although they were sneaked into court, they were neither charged nor accorded audience to take plea. They were unjustly remanded to Kitalya Prison. The police dumped them in prison without reading them their charges,” she adds.

Stella also notes that the state seems to be disinterested in the case as it did not bother to send its representatives. “The DPP which sanctioned the charges, did not not bother to send state attorneys or state prosecutors to appear in court and have the suspects charged,” Stella reveals. “The trial magistrate was absent at the time, so the suspects allegedly appeared before the Chief Magistrate who conducted kangaroo proceedings in camera. The sureties of the protesters were barred from accessing the court proceedings,” she adds as she recounts the very first time the eight suspects were arraigned before court where sureties and press were barred.