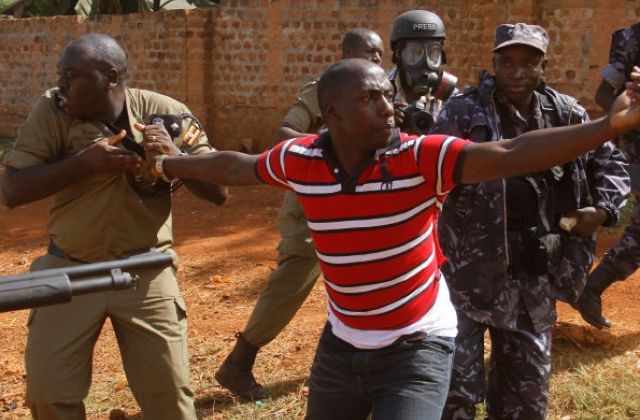 Christopher Aine, a former senior body guard to the 2016 presidential candidate and former Premiere John Patrick Amama Mbabazi has showed interests in the 2021 presidential polls according to reliable sources.

Aine is reportedly planning a mega political comeback to finish what his ex boss, Mbabazi who earlier this year became a regime darling failed to do in the last general elections.

Aine, a former Special Forces Command and Iraqi war veteran came into the spotlight in the previous 2016 polls following his endless fearless battles armed security forces manning the campaigns. His most popular battle was when he solely beat up dozens of NRM supporters and tore down their yellow shirts during a clash between Museveni and Mbabazi loyalists at a rally in Ntungamo district. Also in 2015, he had battled a team of police officers in Jinja town as they tried to block his boss, Mbabazi from advancing to Mbale for a rally.

At the climax of the campaign as government noticed his notoriety, Aine had been spotted and blacklisted by the government as highly wanted criminal, something that forced him to leave the country for over 5 months during the election campaign period. After several months of the search and a shs 10 million bounty fee placed on his head by the Uganda police force led by the then IGP, Kale Kayihura, Aine who had been reported dead ‘resurrected’ at Salim Saleh’s Garuga, Entebbe residence. It is alleged that the child to a former Bush war fighter struck a deal with Museveni’s brother, Gen. Saleh to grant him amnesty. Aine had hid in neighbouring Tanzania for about five months in fear of being killed by the security forces.

Aine would later keep a low profile and urged in the deal till he again stormed the busy Kampala streets on November, 27 last year and caused some fracas. A visibly fierce Aine battled with police officers as he shouted, “we are really tired, we don’t want to kill people but we are tired completely. The people who are taking Uganda’s money are known and nothing is done about them. Nothing is done about corruption. The only things they do is parading people,” Aine shouted as reinforcement of CPS police troops whisked him away.