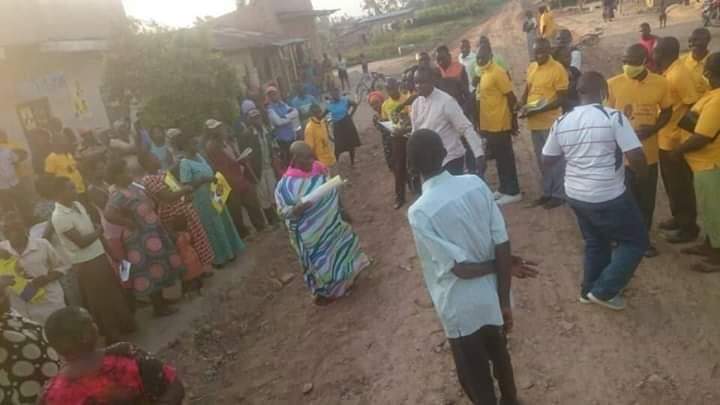 The incumbent youth Member of parliament for the western region, Hon. Mwiine Mpaka has been the talk of social media today following his mass Wednesday evening rally in Mbarara square.

Mpaka doubles as a biological son to the untouchable NRA bush war historical Maj. Bright Rwamirama who fought and influenced the shooting of Gen. Tumukunde during the 2016 elections when the duo had fronted their children to compete for the western youth MP seat. Rwamirama aided his son’s path to parliament and the duo apparently sear and legislate in the same August house.

Mwiine Mpaka is currently eyeing the Mbarara municipal seat, a position that has exposed him to be anti-scientific polls contrary to what his party chairman, Yoweri Museveni urged the Electoral Commission to implement in the 2021 polls.

Pictures of a mindless Mwiine enveloped social media platforms depicting him convening masses of people as he supplied them with his yellow posters and campaign materials.

It should be noted that the opposition politicians led by the Kyadondo East legislator, Robert Kyagulanyi Ssentamu have urged the Electoral Commission to rescind the newly adopted scientific elections which they say cannot be applicable in the Ugandan setting where radio and television stations are owned by pro-regime allies. Besides, the idea itself contravenes the 2005 presidential elections act which asks aspirants to engage their voters in a one on one mode across all Ugandan districts. On Tuesday during plenary, the Bugiri municipality legislator and JEEMA party leader, Asuman Basalirwa urged Museveni to instead declare a state of emergency and postpone the polls. Basalirwa’s proposal smartly means that Museveni has to hand over to the speaker as mandated by the constitution. Today, the EC chairperson said it is only parliament that has the powers to halt this coming election. The MPs are yet to meet with EC officials to discuss in depth the applicability of the new scientific polls. In a Ugandan setting where even social media is taxed, it may be hard to achieve this mode of election which is why even NRM MPs like Mwiine Mpaka are resorting to the customary means of vote hunt.