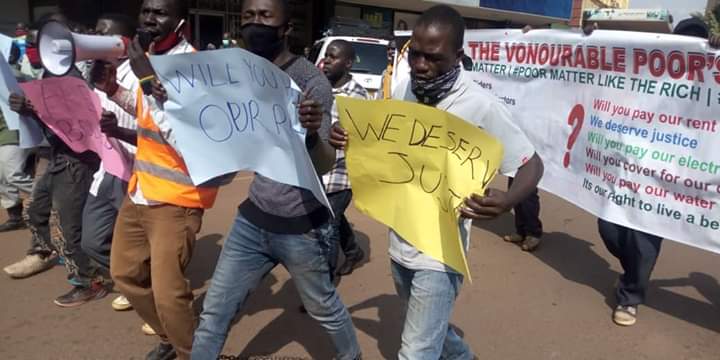 Kampala Metropolitan police have this Thursday morning foiled a well coordinated Boda Boda cyclists’ protest demanding for the reopening of their sector.

A team of Boda riders carrying placards inscribed with wordings communicating displeasure over the lockdown convened a presser at city square before advancing peacefully, chanting and urging the government to permit them to do their work. The frustrated youths chained themselves as they peacefully marched to the city centre. “We are tired of the lockdown. Our landlords are on our necks, we have bank loans,” shouted Hakim, one of the protesters. “Museveni is just being unfair. If our passengers have helmets and have washed hands, how would the virus spread?,” he adds.

Police was tipped off and violently arrived to disperse the march. Several of the peaceful protesters were bundled onto waiting police patrol trucks and drove to CPS where they are being held. The Kampala Metropolitan police spokesperson, Luke Owoyesigire says these youths are to be charged with disobeying lawful orders and failure to follow health guidelines. “We are holding them in our custody at CPS. They did not notify the police about their protest,” he said.

Earlier last week, Boda Boda associations petitioned the speaker of parliament, Rebecca Kadaga to intervene and aid them resume their work that has been under closure for over 90 days. The cyclists urged government to at least allow them operate as they follow standard operating procedures of sanitising among other things.

In Museveni’s sixteenth address on COVID-19, he maintained the ban on the Boda Boda industry and tasked them to stick to carrying cargo till the cure of the virus is discovered. The president claimed that cyclists are potential conduits of the deadly virus since they penetrate deeply into communities.