Resilient Struggle and Massive Protests by Malawi’s Opposition Finally pays off in A landslide Victory.

After the presidential election in 2019 that saw Prof. Mutharika win in a heavily disputed election, the opposition decided to challenge the decision of the electoral commission by appealing to the Supreme Court. The Chief Justice, Andrew Nyirenda, declared that the elections were rigged and told the country to reorganize for an election re-run within 150 days.

The decision by Andrew Nyirenda was far from what many expected, including the incumbent President Mutharika who has ruled the small land locked country for 16 years. Andrew Nyirenda became the second Chief Justice to annul Presidential election results on the continent of Africa After Kenya’s David Maraga in 2017.

Things continued to grow tense as the re-election drew closer. President Mutharika wrote a letter to the Chief Justice, putting him on leave two weeks to election time. The lawyers in Malawi however stood up and started a demonstration that saw law students join, calling on the President to withdraw the decision of putting the Chief Justice on leave. Indeed they were Victorious in their struggle.

The elections in Malawi happened on 23rd June without any international observers but the system was well prepared and did everything in its rightful order. There have been few reports of rigging the election and everything is set for the Malawi Electoral commission to declare the official results. According to the Malawi constitution, the electoral commission has to take 8 days before it can declare the official results.

So far the ballot counting has ended and the unofficial results have already shown the opposition winning with a 58.9% while the incumbent has 38.9%. Celebrations have already started taking up many of the cities in Malawi, including Blantyre, Zomba and Mzuzu. Some viral videos are showing the army joining the people in celebrations.
According to 2020electionmw, Malawi’s prominent website that has been reliable in following up the whole electoral process, Chakwera got 2,479,463.32 votes while Mutharika got 1,637,540.62 and Peter Dominico Kuwani got 54,725.01 votes.

Malawi’s opposition joined up forces to see the demise of Mutharika. There had been massive protests calling on the President to step down. People relentlessly stormed the streets. Many protests saw the army coming to guard the people as they protested. Now the opposition awaits the declaration of its victory. 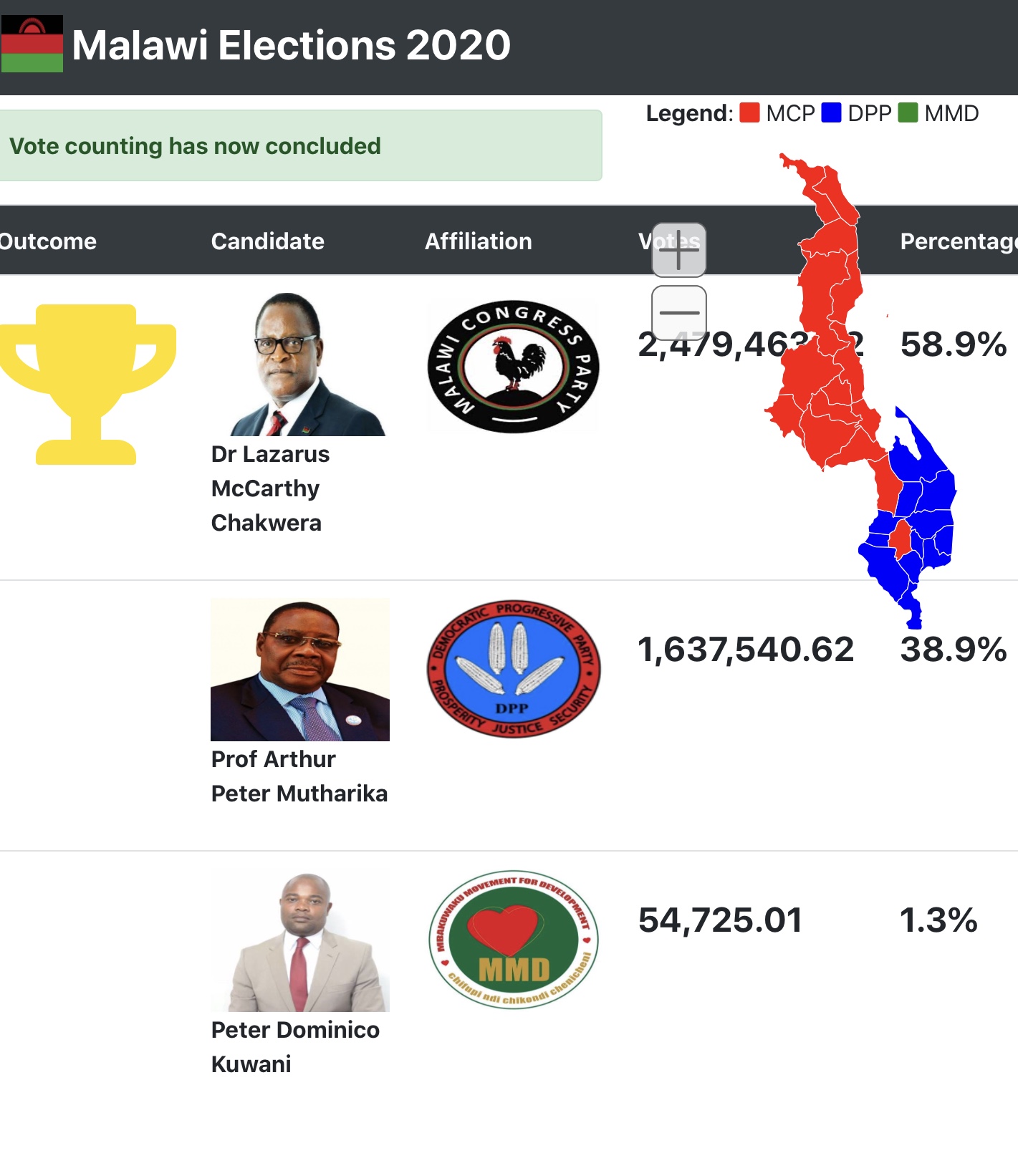