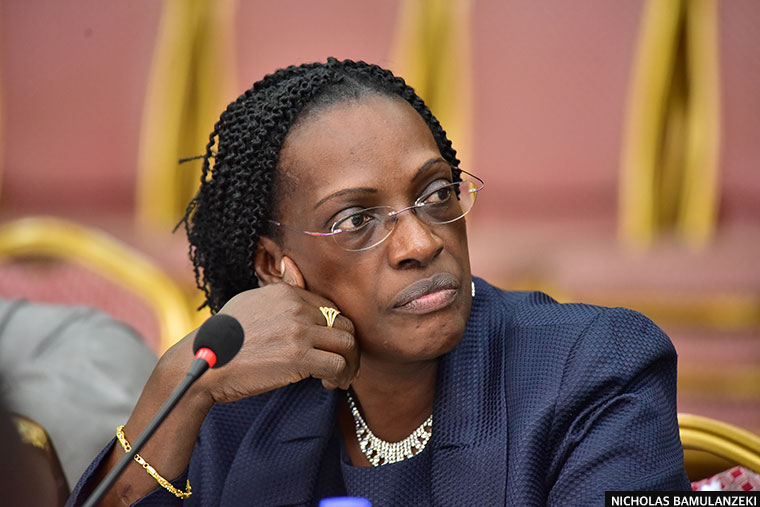 The battle to legitimise and shield looted public properties from being nationalised soldiers on as former Director for supervision at Bank of Uganda, Justine Nuwagaba Bagyenda joins the Ntungamo parliamentary poll.

The scandalous ex BoU official shot in the spotlight during the famous COSASE probe in which an implicating footage showing her albeiting a broad day robbery at the central Bank. The corrupt Bagyenda was captured on footage piling sacks of money into the boot of her motor vehicle. In her 35 years tenure at BoU of which she served 13 of these as an Executive Director Commercial Banking, Bagyenda was allegedly involved in the cheap auctioning of collpasing commercial banks. At just a phone call, Bagyenda reportedly auctioned Sudhir’s Crane Bank Crane shs 2b to DFCU. Six other collapsing commercial banks were sold in a similar manner.

A spreading poster that has enveloped social media platforms, Bagyenda is all smiles readily eyeing the Ntungamo Municipality seat as she seeks to unseat NRM leaning independent Gerald Karuhanga. According to this same circulating poster, Ms. Bagyenda seeks to run under the NRM party ticket.

Bagyenda has reportedly been hiding in the UK where she illegally fled to amid a tight probe by Abdul Katuntu’s COSASE probe. Despite the travel sanctions imposed on her by then, Bagyenda used her other pseudo-passports to sneak out of the country only to fly back when the deadly Corona virus badly struck the UK.

Bagyenda joins sacked URA boss, Dickson Kateshumbwa who also declared to run for the Sheema municipality seat currently occupied by NRM minister, Dr. Erioda Tumwesigye. Analysts say, the corrupt duo seek to protect their stolen wealth by joining politics as the only tool to shield them from being nationalised.