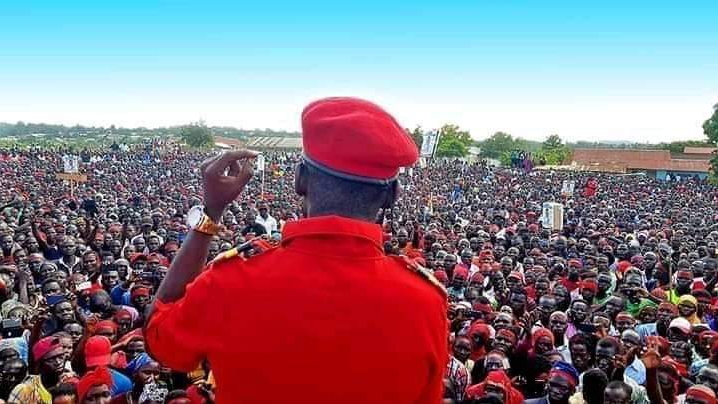 People Power Principal, Ssentamu Robert Kyagulanyi also known as Bobi Wine, is a 38-year old Ugandan musician-turned-politician and by popular acclaim, the leader of the generationally transformational People Power Movement, a platform where all Ugandans embrace their desired destiny through exercise of power enshrined under Article (1) of the Ugandan Constitution. Hon. Kyagulanyi is currently an Honorable Member of Parliament representing Kyaddondo East Constituency in Wakiso district of Uganda. On Wednesday, July 24, 2019, Hon. Kyagulanyi officially announced his intentions to run for presidency in the upcoming 2021 elections.

People Power Vision; A free, prosperous and democratic Uganda with an empowered citizenry, a uganda which adheres to the rule of law and ensures dignity and opportunities for all.

People Power Mission; To rally all Ugandans irrespective of their political affiliation to exercise their power by choosing a people centered government and build a new, democratic and prosperous Uganda

Hon. Kyagulanyi is a proud father of four children, two girls, and two boys, and is married to Barbara Itungo Kyagulanyi, an equally trailblazing leader in her own right as an activist, entrepreneur, author and an outspoken advocate for girl child education, primary health care as well as the elimination of domestic violence, among other noble causes. Born in central Uganda, Hon. Kyagulanyi was raised by his mother, a street vendor in Kamwokya, one of the poorest neighborhoods of Kampala city.

His humble upbringing has shaped his social and political consciousness as reflected in his music and now public service. It is from the same tough streets that Hon. Kyagulanyi rose to attend school and complete college with a Bachelor in Music Dance and Drama from Makerere University Kampala. He is currently studying Law at Cavendish University in Uganda. He has also earned a prestigious Leadership Certificate from Harvard University Kennedy School of Government, which trains government and policy leaders from across the globe.

Hon. Kyagulanyi is the recipient of the 2019 International Humanitarian Award presented by the Rainbow Push Coalition, a multi-racial, multi-issue, progressive, international organization fighting for social change. Upon receiving the award, he stated, “Iam profoundly humbled to get this International Humanitarian Award, which I dedicate to the men, women and children of Uganda who have paid the ultimate price in our struggles for democracy. Thank you Reverend Jesse Jackson and the entire leadership for Rainbow Push Coalition for this recognition.” Most recently, he won the 2019 DEAR Life Time Achievement Award, a prestigious organization that recognizes Africans in the diaspora and around the world making an impact in the world; he dedicated this award to Ugandans living abroad who live outside Uganda because of tough living conditions or political persecution. Using the adversity in his background and experience, Hon. Kyagulanyi built a stellar, award-winning career as an artiste to worldwide acclaim. As a playwright, actor and songwriter, his works cut across genres ranging from World Music, Contemporary Folk, Reggae, Ragga and Afro Pop. To his peers, his music is known as “edutainment”, a mix of entertainment, and educational messages. His music is infused with powerful lyrics steeped in political consciousness and self-determination mantras, calls for social justice, defense and promotion of human and civil rights, socio-economic emancipation, African values, cultural heritage and the universality of Ubuntu. Art has shaped his public service, and he is now successfully using music as a tool for change and activism, mobilizing ordinary Ugandans around issues that affect them, and the ills visited upon them by the hostile regime in Uganda, causing the downtrodden majority to refer to him as the “Ghetto President”.

Hon. Kyagulanyi joined public service in July 2017 as an elected member of Uganda’s Legislative Assembly. While campaigning for his first elective national office, he used his simple clarion call “If Parliament can’t come to the Ghetto, we will bring the Ghetto to Parliament.” This resonated with the majority of Uganda, who have gravely suffered under the 33-year long military dictatorship of a self-styled former warlord, Yoweri Museveni, and his family. In this respect, he has been able to mobilize the masses behind him, especially Ugandans who felt they didn’t have a voice, and their support for him has surpassed the borders of his constituency to the rest of the country and now the international community.

The turning point for Hon. Kyagulanyi happened in 2016, during the most recent presidential elections, which was characterized by rigging, violence and irregularities exercised by the state and the ruling NRM party. This was the turning point for Hon. Kyagulanyi, who refused to join fellow singers who were bribed to sing praise songs for the reigning dictator Museveni.Although he always addressed social ills in his lyrics, it wasn’t until 2016 that he announced his decision to join active politics, and so, Ugandans sat up, listened and saw this emerging leader who wasn’t willing to sell out or be bought but instead stood on his own principles.

In the last two years, Hon. Kyagulanyi along with other members of the opposition, have led the “Togikwatako” (Do NotTouch) campaign against changing the Constitution to remove the age-limit, which would open the door for Museveni to have life presidency. He has also played a significant role in mobilizing youth to protest the social media tax, which is intended to quell the growing anti-Museveni fervor among the younger generation who are active on social media and technology. He was arrested several times, tortured and barred from singing at concerts or addressing rallies.

On August 13, 2018, Hon. Kyagulanyi became part of Arua 33, a group of 33 people who were arrested and tortured during the Arua Municipality elections. Kyagulanyi was in Arua to support Kassiano Wadri, an opposition leaning candidate. He and other members of Parliament, most notably Francis Zaake, were beaten and detained. Even when he was being held in military detention, candidate Wadri, won in a third parliamentary election—where Museveni’s party lost to the opposition and Kyagulanyi played a crucial role in the outcome of the election. Government decided to halt all by-elections as a result of Hon. Kyagulanyi’s influence.

Despite the grave personal danger and costs that they face from a corrupt cabal using the state machinery, and directed to them, their families and associates, Hon. Kyagulanyi and his pro-People Power colleagues continue to champion the peoples ‘yearning for a legal and peaceful transition. The dangers these opposition leaders face include brutal torture; illegal detentions; embargos on their businesses and professional livelihoods; baseless and unending trials on trumped up charges; assassination and attempted assassinations. Despite this increasingly brutal crackdown, Hon. Kyagulanyi and his colleagues continue to peacefully and legitimately fight the most egregious ills, being perpetuated by the unpopular Kampala regime and its henchmen.

In a class of emerging young leaders in this century striving for African self-actualization, Kyagulanyi is unique because he maintains a magnetic pull in the political arena, which has helped the opposition win key elections. He’s stated over and over “Uganda is the only home I know,” and will die trying to change it for the better. Most recently, the Foreign Policy magazine named Hon.Kyagulanyi as one of the 100 most influential global leaders in 2019 amongst many other awards.

Although police interrupt his music shows, he consistently uses his art as a tool for activism to challenge apathy. He urgesUgandans to speak up, mobilize and organize—online or offline. He is an outsider, who was not born rich or privileged, but rose fromthe slums to Uganda’s parliament. Hon. Kyagulanyi gives Ugandans hope that a post-Museveni future is possible and very near, where perennial ills will be cured.

These ills include widespread socio-economic deprivation; near collapse of public infrastructure and social amenities; brutal stifling of political and constitutional freedoms; subjugation of human rights and civil liberties; wanton military takeover of various institutions, swatches of land, and civilian properties; unemployment; corruption; state-meted violence; systematic abrogation of the constitution; and the abuse the rule of law and order with impunity. This is exactly what Hon. Kyagulanyi and the People Power Movement are seeking to change and usher in a generational, positive change under a 21st century, bottom-up leadership based on accountability, diversity, self-determination and patriotism.