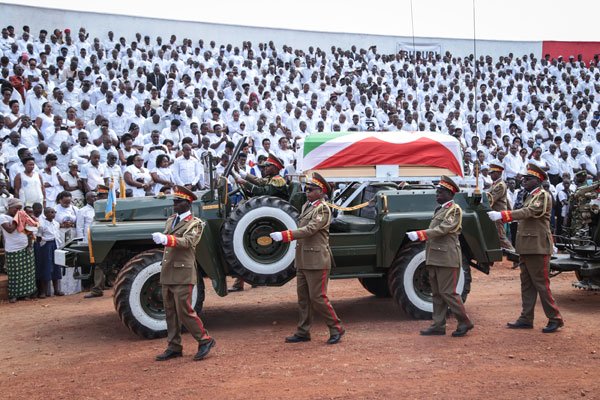 On Friday, June 26, the body of the former Burundian president, Pierre Nkurunziza was laid to rest in a state arranged funeral.

Nkurunziza, 55 reportedly succumbed to a heart attack on June, 8 according to the official Bujumbura statement. The fallen leader had just witnessed a transitional election in which he was yet to hand over to the newly elected president, Ndayishimiye who hails from his own party.

Sources say the deceased first suffered acute respiratory problems and a cardiac failure prior to his demise. On the contrary, international media fraternity linked Nkurunziza’s death to the ravaging deadly Corona virus disease when it emerged that his own wife, Denise Bucumi was earlier in the month rushed to the Aga Khan hospital in Nairobi after suffering the same from the virus. Relatedly, moments after Nkurunziza’s death, his own mother also suffered an attack and died instantly.

The state funeral was flanked by a mammoth crowd which convened at the Gitega stadium. A mass convoy snaked through Bujumbura from Karusi where Nkurunziza reportedly breathed his last.

Foreign dignitaries from neighbouring countries like Tanzania sent representatives to attend the funeral. Ex Tanzanian president, Jakaya Kikwete was also present and what was common at the burial was the persistent ignorance of the Corona virus pandemic as no social distance or wearing of face masks was observed.

The ex first lady, Denise Bucumi gave a tear watering speech to mourn her fallen husband. “In the Bible it is written that we must accept God in everything. There was nothing else to do and I did it,” she said.