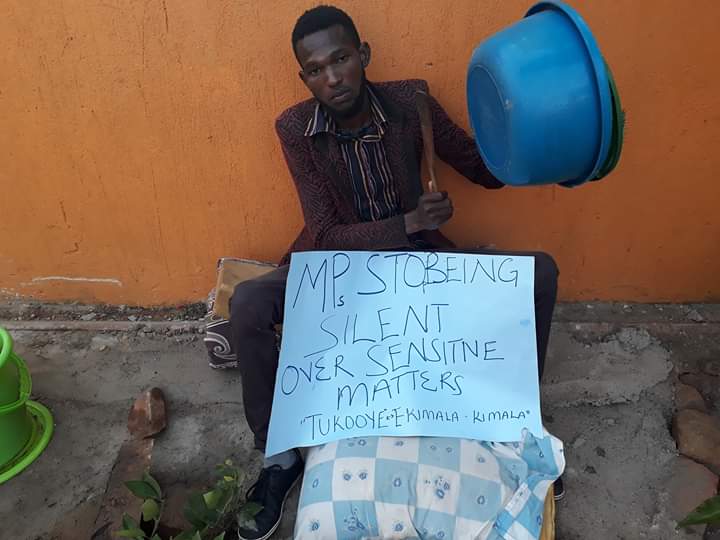 A team of activists have embarked on a peaceful march to parliament in a bid to pester legislators to look into issues affecting the young unemployed plight that has suffered the wrath of the lockdown.

SEE ALSO: No visits allowed for the jailed People Power ‘No Nedda’ activists

Prior to the peaceful Tuesday march, the youths spoke to this site and intimated that they could not sit back and watch on as parliament continues to comfortably pass ‘useless bills’ while ignoring real matters disturbing the young generation. “These MPs have become useless and empty. We are not working because most of our jobs have gone. We have debts and unpaid rent arrears, how will we get out of this?,” asked Sserunkuuma John Bosco, one of the peaceful protesters. “In other countries, relief packages to boost the livelihood of the downtrodden are being passed while here the story is different. All they care about is Museveni’s life presidency. We are fed up and ready to storm parliament today,” he adds.

The determined protesters are carrying placards inscribed with wordings expressing their disgruntlement with the rogue NRM regime. “I am now unemployed with no hopes of fending for myself. My other concern is that all my jailed colleagues who participated in the ‘No Nedda’ campaign are released unconditionally,” says Uwesa Bruhan, a Makerere student taking part in the protest. “For over three decades, we’ve lived in oppression. Our parents failed to liberate the country. We too, can’t be silent and wasted. The right time to rise is now,” he adds.

By the time of filing this report, the young protesters had braved to walk from Rubaga to the downtown Kampala advancing towards parliament. They are marching with whistles and pans to awaken the other ‘silent oppressed’. Police has not yet reined in to quash the peaceful march.