The race for the Kampala woman MP has kicked off with the renowned political activist and cyber warrior, Dr. Stella Nyanzi finally approving the lingering rumours that she is to unseat incumbent Nabillah Naggayi Ssempala.

On Monday June, 29 noon, Dr. Stella in company of some of her loyalists hit the FDC party headquarters at Najjanankumbi in Kampala where she picked the forms from the party Vice Chairperson, Hon. Joyce Nabbosa Ssebugwawo. This site has reliably learnt that the race for the ticket has three other interested members who are to rival Stella Nyanzi. Earlier, the odds were ripe for Nyanzi before she allegedly cyber bullied FDC strongman, Dr. Kizza Besigye in some of her early June Facebook posts in which she pressed for opposition unity with People Power supremo, Robert Kyagulanyi Ssentamu alias Bobi Wine leading the front. In that post, Nyanzi even awarded positions to opposition leaders and made Besigye a premiere to Bobi, something the former’s loyalists did not welcome. The row deepened with the unapologetic Nyanzi throwing tantrums at the person of Besigye and the entire FDC party as she accused them of being dictators and derailing from the party core values. Nyanzi also stressed that the party cyber bullies launched belittling attacks on her young lover and persistently mocked their relationship in retaliation. 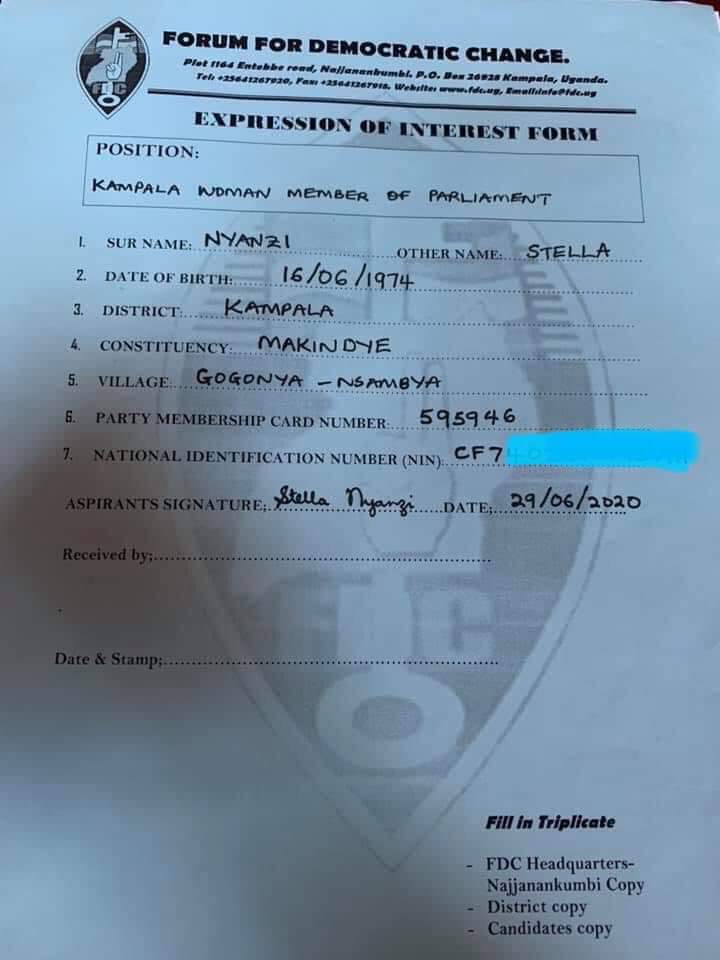 Nyanzi confirmed her willingness to vie for the seat of Kampala district woman MP in a Monday post where she wrote;

“Today, I collected my “Expression of Interest” and “Nomination for Party Primaries” forms from the party headquarters of FDC. I also renewed my party membership for 2020.

I am extremely grateful to my proposer the Deputy President of FDC – Owekitiibwa Joyce Sebugwawo, and my seconders who include Buwembo Habib and Fred Bugoba.

My aspirations for the Kampala Woman Member of Parliament seat are now firm. I am preparing hard for the party primaries.”