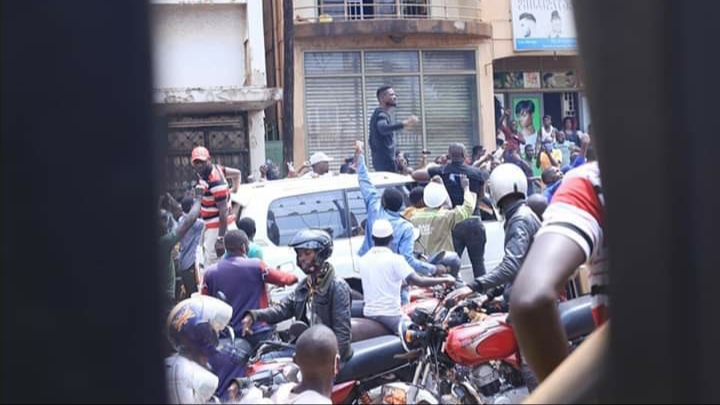 Kyadondo East member of parliament and the leader of People Power Movement vying for Presidency, Hon Robert Kyagulanyi Ssentamu aka Bobi Wine and his supporters have today defied the coronavirus scare guidelines.

This comes after Bobi Wine was hosted at Mengo based Radio station Saturday morning on a program commonly known as “Parliament Yaffe” hosted by Meddie Nsereko Ssebuliba.

As the program was coming close to an end, people started floating Masengere and expressed their support. Some climbed up the gates, others started sweeping the road as Boda Boda riders were warming up to escort him back something that they did willingly.

Tention started rising as masses gathered all over with what can be termed as natural electric pulse hoovering based on true love and support to the incoming presidential material where no any single coronavirus guideline was observed.

This was later accompanied by a procession as Mr. Wine was escorted back to the People Power secretariat in Kamwokya. This has continued to show and prove that scientific mode of campaign won’t work even if the presidential candidates go on to TVs and Radios because what people want is to see their candidates and have a health kind of interaction.