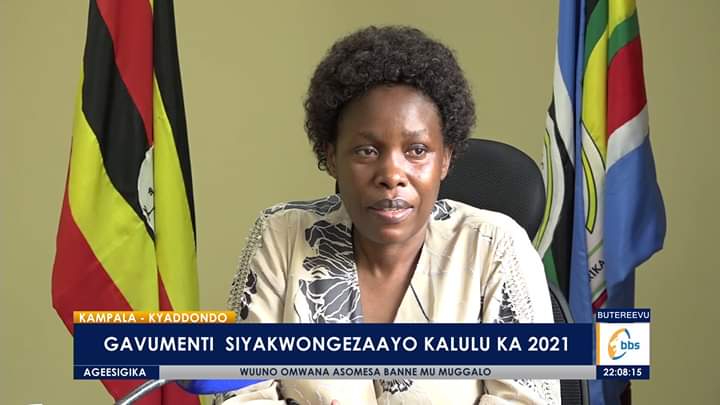 The Minister for information and communications technology, Judith Nabakoba has strongly cautioned members of the media fraternity against facilitating acts likely to spread COVID-19 while hosting politicians under the arrangements of the newly adopted scientific elections model. Her comments come just a day after the People Power principal, Robert Kyagulanyi Ssentamu alias Bobi Wine was granted an ovation by his mass supporters that trailed after him just as he exited CBS radio.

Nabakoba expressed her anger on Bobi, in a televised statement issued on Sunday as she reacted to the mammoth gathering that followed the presidential hopeful, Robert Kyagulanyi Ssentamu after a radio talk show at CBS on Saturday July, 4.

In a footage that wildly trended on social media, cheering supporters of Bobi Wine are seen convening in a procession that follows the presidential contender through streets of Kampala. Minister Nabakoba says such acts contravene the government arrangements for the scientific elections which are being considered as a proper measure of containing the spread of the Corona virus disease since it will fully emulate the digital media platforms as a convenient means of campaign for candidates. “We strictly urge all candidates to refrain from communing masses. What Bobi Wine did on Saturday is unacceptable and not in line with the scientific elections model,” she said. “What Bobi did was illegal and does not secure lives of the people yet this should be our main priority,” the furious Minister adds.

Nabakoba also threatened to use her ministerial office to withdraw the licence of any media house that will tolerate what she terms as ‘hate speech’. According to Nabakoba, some radio and Television stations are not censoring the speeches of the hosted politicians. “I urge all media houses to desist from tolerating content which instills hate and division amongst Ugandans,” Nabakoba reiterated while reacting to Bobi’s Saturday morning show on CBS radio. She further threatened to ban Bobi Wine from appearing on media platforms if he does not control his crowds.