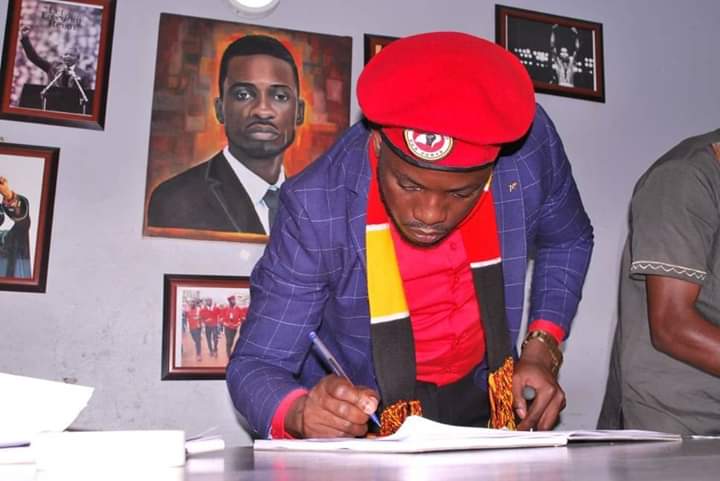 The shaky NRM government has again pressed the panic button after heavily sealing off the entire street to the People Power headquarters in Kamwokya.

As thousands of candidates flank the headquarters to collect nomination forms for the various elective positions countrywide, today Monday, July 6 has been tense after the regime heavily filled the roads to the headquarters with armed members of the LDU, UPDF and the police. Barricades, check points, mambas, patrols and plain clothed spies were the order of the day. Our reporter managed to snatch a byte from one of the deployed UPDF personnel who unveiled some of the motives behind today’s situation. “Our seniors asked us to monitor this area. We’ve been tipped that Bobi Wine is planning to lead a huge mammoth crowd to Kampala and protest the scientific elections,” said the UPDF soldier on duty. “Our role here is to ensure that the procession is contained in case it attempts to advance to Kampala town,” he adds.

We contacted the UPDF spokesperson, Brig. Richard Kalemire for a first hand narrative but our efforts to reach him didn’t yield as our calls went unanswered. A source in the UPDF however revealed that the deployment is to routinely be maintained at the headquarters till the Commander in chief, Gen. Yoweri Museveni loses interest.

Street vendors who operate on just adjacent to Ssemakokiro plaza say their businesses are not thriving like they used to. “Our customers fear the presence of the LDU. They are not flooding oir stalls like they’ve been doing,” remarks Nalongo Aisha, a potato chips seller. “Something is not right with this government. Why would they frustrate a harmless civilian like Bobi Wine,” she adds. Sarah Namulindwa, a grocery operator appealed to the government to withdraw its troops from Kamwokya as she reiterates that, ‘Bobi Wine is not a rebel like they were’.