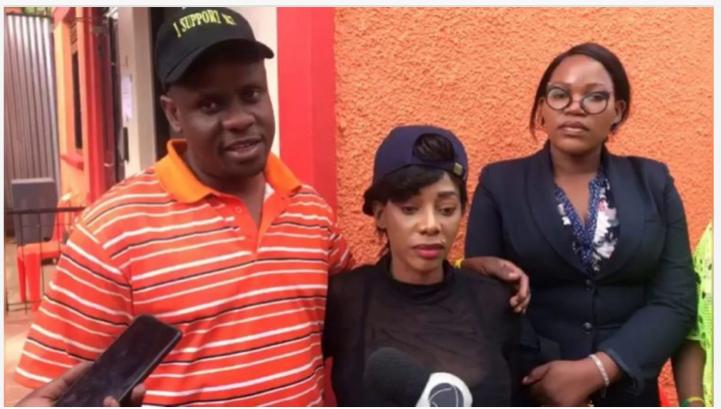 The self proclaimed head of Ugandan sex workers, Shanitah Namuyimbwa largely known by her alias ‘Bad Black’ has trashed renowned NRM linked events promoter, Balaam Barugahare over his recent attempt to shut her down with a few millions to back off her verbal clash with the Health Ministry officials.

A seemingly unapologetic socialite yesterday lit a fire on social media platforms when she unveiled her recent photos depicting her fully donned in the People Power overall combat and a red beret. Reliable reports say Bad Black’s conversion to Bobi Wine’s People Power movement took Balaam by surprise. “He was warming up for his luncheon when he saw pictures of Bad Black in red attire,” says a source at Balaam’s Radio 4. “He had to cut his meals short to make calls to Bad Black though she could not pick up,” adds the source.

After donning in the People Power outfits, Bad Black fired some harsh remarks on Balaam for trying to manipulate her conscience. “Am not a fool to support NRM. I accepted what you told me because all I wanted was you to pay my money which you didn’t give me in full amount. The day I realized what Bobi Wine is fighting is the day I believed in his ideology. Bobi Wine does not pay any single coin to support him, you just find yourself supporting him by default.”

SEE ALSO: Dr. Stella Nyanzi Backs Bad Black, Threatens To Call all Sex Workers and their Clients for A Protest.

Bad Black’s official defection to People Power comes barely weeks after Balaam had assured Museveni that the socialite would retreat and remain loyal to the NRM party. Some sources say Black’s defection has been inspired by the small cheque she received from Balaam. She was just given shs 10m which she considers too small compared to the shs 550 millions she had pressed for in a legal suit. Sources further add that the money was paid privately by Balaam and not the Health Ministry as Black had wanted. “She was told to either take shs 10m or forget about receiving any money since she did not have a formal agreement with the people who contacted her to do the advert,” a source revealed to Ekyooto.