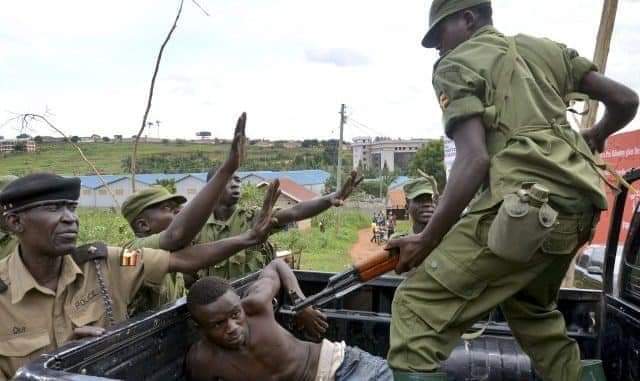 President Museveni has today ordered for the immediate suspension of the Local Defence Unit recruitment programme following the clobbering of high court judges; Masalu Musene and David Wangutsi in Mbale.

The visibly bitter Museveni who commands all armed forces in Uganda, yesterday in an emergency security meeting rang his young brother, Gen. Salim Saleh to rein into his LDU initiative that is gradually inviting public scrutiny as the brutality rages on. A source privy to the meeting intimates to this site that the president’s concerns sparked from the clobbering of the regime cadre judges, Masalu Musene and David Wangutsi. Earlier in this very week, the LDU personnel were captured on footage battering the Mityana LCV boss, Joseph Luzige who had tried to intercept them from mistreating a sickly heavily pregnant woman who was being transported on a Boda. As if that was not enough, the same LDU featured in Makerere where they allegedly beat a student, Emmanuel Tegu to death point. Another footage emerged on social media showing another LDU personnel beating up an unidentified man along Northern bypass in Kampala. Several other incidents have been reported countrywide. A most recent media report unveiled another incident in Buikwe where another LDU officer hit a Boda rider with a gun butt that has since left him hospitalised under critical health complications.

A source privy to the security meeting says Museveni has contested the plea of the UPDF spokesperson, Richard Kalemire who wanted the forces to stay and be added professional training. “Museveni didn’t like that idea of taking the forces for extra training. He suggested a disband of the incumbent force,” reveals the source. “But we are not certain if this is just fiction since he largely needs the same force to contain the People Power supporters,” he adds. A section of activists however say the government is just playing politics and trying to rebrand its ugly image. “Who knows if the suspension is even real? These people may just give the LDU a police outfit,” says Nana Mwafrika, a civil and political rights activist.