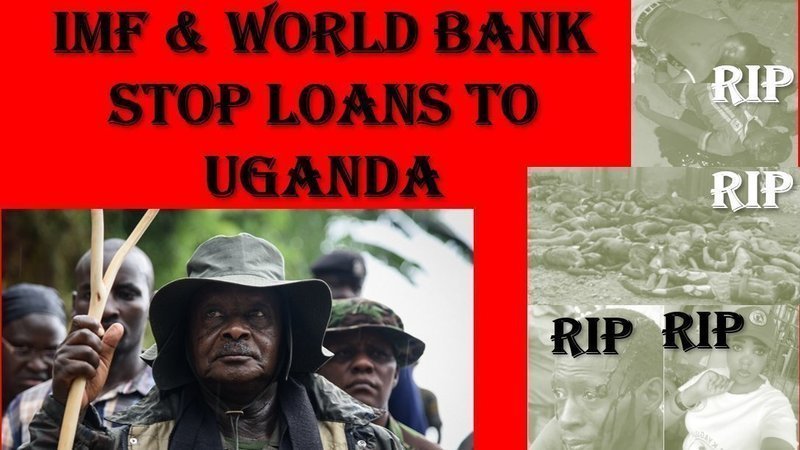 The IMF and world bank should understand that funds provide to Museveni and for his personal uses and Ugandans should not be liable for the payment. The current continued process of providing loans to Museveni is a predatory lending to Ugandans.

We request the IMF and world bank not to ignore Ugandans and especially the opposition members led by Kyadondo Member of Parliament Robert Kyagulanyi Sentamu AKA Bobi wine.

(1)   President Museveni and his family members that include Sam Kutesa and his in-law have orchestrated a corrupt system and are swindling loans into offshore accounts.

(2)   Abuse of Refugee Process by the Museveni who has created fake refugee from Ethiopians, Burundians, Eritreans, Congolese, Sudanese, and Rwandese. Museveni is using the refugee situation to extort money from donors. Museveni uses the fake refugees to fraud the presidential election process in Uganda to vote for him. In exchange, Museveni gives Ugandan passports to economic refugees and a process to come to the USA, Canada, Australia, and other western nations.  One the contrary the Ugandans have been forced to seek refuge in other countries such as USA, Britain, Canada, and many girls working as maids in the middle East.

(3)   President Museveni has engaged in political persecution, torture, and cold-blood murder of Ugandans mainly the opposition members lead by the Kyadondo Member of Parliament Robert Kyagulanyi Sentamu AKA Bobi wine. Museveni has been involved in serval genocides in Uganda. In 1986, Museveni lead a war and was directly involved in killing at least 1.5 million Ugandans in Luwero triangle. Museveni was involved in massacre of the Acholi in northern Uganda. In 2016, Museveni ordered Brigadier Peter Elweru to massacre the Bakonjo Tribe in Kasese.

(4)   In the past, 34 years the donors and western nations have put pressure on Museveni to promote democracy in Uganda. To appear democratic to the donors, President Museveni created fake opposition groups through which he was able crack down on true democracy.

(5)   Museveni is planning a Genocide during the upcoming 2021 presidential elections in Uganda. There are several cases where Museveni has been directly involved in war crimes in the great lake regions of East Africa.

a.     President Museveni sponsored the war that lead to the 1994 genocide in Rwanda. The current president of Rwanda Paul Kagame was a military commander in the Ugandan force who took power in Rwanda through a military coup sponsored by Museveni.

b.     President Museveni has involved in sponsoring war extremists in Congo and looting minerals.

d.     President Museveni was involved in war crimes in Burundi

On May 6th, 2020, the IMF approved a Loan of USD $491.5 million to Uganda government to address the Covid-19 crisis. The Ugandans request the IMF to reconsider Covid-19 Loan and future Loans pending investigations about appropriation of the funding. The funding is intended to support Ugandans within this Covid-19 crisis. However, our evidence in the Refs attached, prove that the Loan has been misappropriated and swindled by government officials.

During this Covid-19 crisis, Ugandans followed the World Health Organization (WHO) directive to quarantine. The government pledged to provide relief food to at least 1.5 million Ugandans in desperate need. President Museveni passed a directive prohibiting Ugandans from distributing food to those in need. The president equated food distribution to murder punishable by DEATH. Only government officials were given mandate to distribute food. However, the Ugandan government has barely provided relief food to the 1.5 million Ugandans.

The little food distributed (beans and posho so far is unhealthy and harmful for human consumption.  According to the speaker of Uganda parliament Rebecca Kadaga, the milk that was provided to the Ugandans is expired and not fit for human consumption. Most of the Ugandan are already in danger of hunger during these Covid-19 times. We have evidence that the distributed food per home (approximately 5kg/11lbs) is done by military personnel who are committing atrocities to vulnerable people. The military personnel are rapping women and, in some cases, giving food in exchange for sex.

Due to government failure to provide food to families facing hunger, some Ugandans within the country and overseas are donating food. However, the government of Uganda has politicized the Covid-19 crisis by arresting and torturing opposition members from the people power movements. Member of Parliament for Kampala municipality Muhammad Nsereko can be seen distributing food with no arrest. On the other hand, MP for Mityana municipality Zaake Francis was arrested on April 19th, 2020 and brutally tortured by president’s Military force (SFC).

The government of Uganda has misappropriated the funds according to speaker of Ugandan parliament Rebecca Kadaga. The misappropriate spending in table-1 below was whistle blown by MP for Kyadondo East constituency and people power leader Robert Kyagulanyi Ssentamu AKA Bobi wine. Robert Kyagulanyi mentioned the parliament to which he belonged was bribed with 10 billion Uganda shillings to be split amongst the 426 members of parliament.  The 10 billion Uganda shilling was a bribe to the Parliamentary members to favor the president Museveni’s supplementary spending budget.

The covid-19 crisis has caused the Ugandan government to expose the enormous level of corruption orchestrated by the President Museveni and his regime including the government organs. These Covid-19 times are desperate times the Ugandan need the relief food and essentials. Instead the government bureaucrats have embezzled the money to be used for personal projects.

We request the IMF to urgently halt the covid-19 funding and future funding to Ugandan government pending investigations. The investigations include violations. We request the IMF to audit the Ugandan government and demand accountability of Covid-19 funds. Ugandans overseas and local will follow legal process that include demonstrations, legal lawsuits that clearly show that the IMF has been secretly corporation with a corrupt regime to approve loans for president Museveni and his few government regime at the expense of Ugandans.